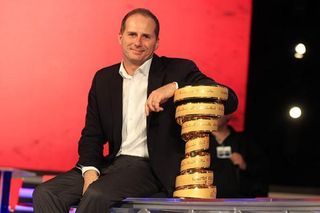 Former Giro d'Italia director Michele Acquarone has been cleared of fraud by a court in Milan after six years of investigations and court hearings.

According to a report by the La Presse news agency and other Italian media, former company accountant Laura Bertinotti was given an eight-year and eight month sentence for the massive misappropriation of funds.

All the other accused were also cleared. Bertinotti has the right to appeal the sentence.

* Acquarone fighting to save his reputation after Giro d'Italia dismissal

* Acquarone vents his anger after being fired by RCS Sport

Acquarone, who helped modernise the image of the Giro d'Italia during his spell as the event organiser, was sacked by parent company RCS Media Group in October 2013 after the Italian media company discovered a misappropriation of funds RCS Sport accounts. €15 million of company funds and public funding disappeared after money was carefully and gradually drained from different RCS Sport event accounts between 2006 and 2013.

Acquarone always insisted the money was taken out in cash over several years without his authority, with the central RCS Media Group accounting office responsible for controlling the cash flow. An internal investigation at RCS Sport failed to reveal where the cash ended up with police action only recovering a minor amount.

Acquarone told Cyclingnews that the signatures and initials on documents were falsified. He was dismissed from his role of Chief Operating Officer and Director of the Giro d'Italia, with RCS suggesting he should have and could have known about the misappropriation of funds.

Bertinotti disappeared after the misappropriation was discovered, eventually creating a start-up in Switzerland, according to her LinkedIn page. She is apparently now based in her hometown of Arona in northern Italy, where her father was once mayor. The judge handling the case ordered the seizure of €700,000 of Bertinotti's assets as RCS Sport and the Milan Marathon fight a civil legal case for compensation.

Acquarone now works for the d-share digital publishing company but has always fought to clear his name. He posted a brief message on Twitter when news he had been cleared of fraud emerged. "Better late than never. A small joy after six years of huge pain. Thanks to everyone who has supported me over the last few years."