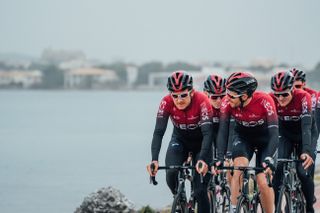 Thomas claimed overall victory at the Volta ao Algarve in 2015 and 2016, and placed second overall behind his teammate Kwiatkowski in 2018, when he went on to win the Tour de France.

The Welshman skipped the race last year, preferring to start his season at the Volta a la Comunitat Valenciana but returns to Portugal as he begins his season and again takes aim at the Tour de France as designated joint team leader with Egan Bernal.

"I want to get stuck into a good five days of racing," Thomas said via Team Ineos.

"There are a lot of guys in our team who have already done at least a week of racing - Rohan, Dylan, Kwiato - and they’re targeting early races and going really well. I’ll be there to give them a hand and should still be up there but I won’t be going for the win.

“Last year was very different to any other in my career really, coming back from winning the Tour. Usually I start the season quite strongly. This year I’ve not been as intense as normal and it’s a little different these days where the Tour is the sole focus for the whole year but I'm feeling better. I’m not at race weight yet but my power numbers are encouraging. I’m still a lot lighter than this time last year and my numbers are better as well.”

After riding the Tour Down Under last month, Dennis makes his first appearance of the season on European roads in Portugal, and the Australian will look to shine in the 20km time trial in Lagoa on the final day of the race.

The mainstays of the team’s cobbled Classics unit, Luke Rowe and Dylan van Baarle, will also be on-hand in the Algarve after beginning their campaigns in Australia in January.

After leaving Cannondale in 2014, Wurf has competed exclusively as a triathlete in recent seasons but he will combine his triathlon career with competing for Team Ineos in 2020. His first outing for the team came at the Cadel Evans Great Ocean Race earlier this month.

The Volta ao Algarve gets underway on Wednesday with a flat stage from Portimão to Lagos that should favour the sprinters. The race features summit finishes on the Alto da Fóia on stage 2 and at Malhão on stage 4 before concluding with a time trial in Lagoa.