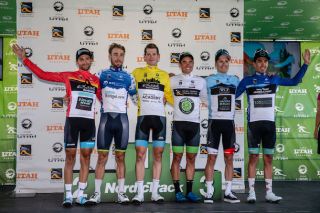 The final winners of the leaders' jerseys at the 2019 Tour of Utah (Image credit: Jonathan Devich/epicimages.us)

US domestic teams hoping to earn UCI points will have slim pickings domestically in 2020, with the men having just five UCI races on the UCI's America Tour, and the women's US UCI options limited to just three.

Losing the WorldTour Amgen Tour of California last month was a blow to both the men and the women, and the Winston-Salem one-day race is also off the calendar this year, but a new one-day race for the men in Maryland helps fill the void. The Tour of the Gila also isn't listed on the UCI's recently released 2020 schedule for the women, although the men's race is.

US domestic UCI racing will start for both men and women at Arkansas' Joe Martin Stage Race, a four-day 2.2 stage race that runs April 2-5. The men will move on to the 2.2 Tour of the Gila in New Mexico from April 29-May 3, with both the men and women racing again in July at the UCI Chrono Kristin Armstrong time trial in Idaho.

The Larry H. Miller Tour of Utah in early August is now the highest ranked UCI men's stage race in the US with the new Pro Series designation, while the women will take on the Colorado Classic later that month in their final US UCI race of the season.

The men will then head east to Baltimore for the one-day Pro Series Race, the Maryland Cycling Classic on September 6.

Losing the Tour of California will not have a huge effect on the North American Continental teams, which have already been locked out of the race the past two seasons since it moved to the WorldTour level. The two North American Pro Continental teams that were eligible for California, Rally UHC and Novo Nordisk, appear committed to racing in Europe although USA Cycling did work to get a rule change that allows the Pro Conti teams to race in non-UCI events.

USA Cycling will once again offer a full schedule of non-UCI events as part of its Pro Road Tour calendar, which hasn't yet been released for 2020. The 2019 calendar included a combination of stage races, one-day races, time trials and criteriums for a total of 17 events that started in March with the Redlands Bicycle Classic and concluded in Pennsylvania with the Buck County Classic.