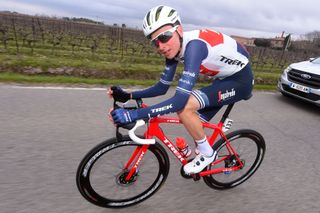 Trek-Segafredo's Niklas Eg has told the Danish media that he thinks it's "50/50" whether he'll make the final eight riders picked for this year's Tour de France team, with just one rider from the shortlisted nine-man squad set to miss out.

"Riding the Tour is the pinnacle of professional cycling," Eg told Danish newspaper Ekstra Bladet at the weekend, "and every time someone asks me if I've ridden the Tour de France, I've had to answer no.

"Right now, I'm not really sure, but think it's 50/50," he said of his chances of being given one of the final berths. "I'm currently putting all my energy into being as sharp as possible for when the season starts, so I can prove that it has to be me."

Eg will join most of the riders on the long list for a training camp in the French Alps in mid-July. Only his Danish compatriot Mads Pedersen and Kenny Elissonde won't be in attendance.

Mollema: Porte and I know what we need to do at the Tour de France

Richie Porte: I'll be ready to go to the Tour de France

"I'll have to ride well and show our leaders, Bauke Mollema and Richie Porte, that I can be helpful for the mountain stages," Eg said. "It's a tough Tour, with a lot of climbing, so I hope I'm the type of rider they need.

"In general, I think I've moved up a level this season," continued the 25-year-old, who finished 13th overall at this year's Tour de la Provence, followed by 15th overall at the UAE Tour, ahead of the season being cut short by the coronavirus pandemic.

"It's also why the team has given me the confidence of putting me in the long-list squad. It's a pat on the shoulder."

Of the nine riders announced, Mollema, Porte and road race world champion Pedersen are surely givens for the team, and one might reasonably expect 2020 Omloop Het Nieuwsblad winner and three-time Tour finisher Jasper Stuyven and the experienced Elissonde, Edward Theuns and Toms Skujins to be included. That means that Eg or Alex Kirsch – neither of whom has done the Tour before – is likely to make up the eight, leaving one rider disappointed.

"There are probably a handful of riders who are safe," said Eg, who's ridden both the Giro d'Italia and the Vuelta a España since joining the team in 2018. "The rest of us are left hoping we'll get the other spots. It'll be exciting to see how it ends."

"It makes me a little nervous," he added of the wait to hear who the final eight riders will be.