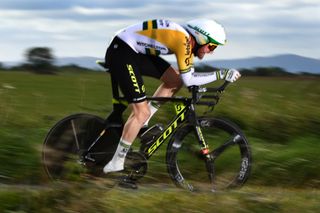 Mitchelton-Scott's Luke Durbridge says that riders are likely to be "motivated, strong and ready" by the time the major one-day races come around in October on the new, revised UCI calendar, which was released on Tuesday. However, the overlap between the Tour de France and the World Championships – and the lack of time-trial kilometres at this year's Tour – means that a time-trial specialist like Durbridge could struggle to be ready for the Worlds TT.

The new plan for the rest of the 2020 season has brought potential targets for riders and teams, and a degree of certainty for the organisers of the bigger events. But with the coronavirus pandemic still continuing – and despite the partial lifting of lockdowns in parts of Europe – it remains to be seen whether the calendar will restart with Strade Bianche on August 1, whether the Tour de France really will take place from August 29-September 20, or if the one-day Classics will happen later in the year.

"It means a lot to have something in front of us," Durbridge said in a team press release. "I think it's great for our sport in terms of having something to look forward to. Everyone goes from race to race, and needs goals and objectives. We've had so much indecision in this past period that everyone has been in limbo.

"I hope that the programme they've released will go ahead," he continued. "We don't 100 per cent know, but at this stage we can only go off the information we've got.

Durbridge said that the quick change between the Grand Tours and the one-day races that will come with the new 'squeezed' calendar will be "interesting".

The 2020 UCI Road World Championships is the only event to be retaining its original dates of September 20-27, with its first day of competition overlapping with the final day of the Tour de France.

"It could potentially work really well for some riders, but it depends on what your ambitions are for the World Championships," Durbridge said.

The reigning Australian time trial champion will be targeting the Worlds time trial, which is now set for Wednesday, September 23, having been moved from its original date of September 20.

"It's a flat time trial but a very hilly Worlds road race, so if you have an objective to go to the road race, then the Tour de France works really well because there are so many climbs," said Durbridge, who was the under-23 time trial world champion in 2011 and the junior champion in 2009.

"But in terms of the time-trial specialists, I feel it could be a bit of a risk with how close it is, and it will be difficult with no major time trials at the Tour de France, so you wouldn't have ridden your time trial bike in a month."

With the major 'spring' Classics now coming later in the year – and the majority are set to take place in October – riders may have got some competition into their legs during August and September. For a one-day specialist like Durbridge, who's also likely to have been part of Mitchelton-Scott's squad for the Tour de France ahead of the Worlds, the new Classics dates could prove to be positioned perfectly.

"I feel that maybe there will be a more universal build-up for the Classics," he said. "Everyone will have had exposure to sun, exposure to long distances, plenty of time to prepare…

"I expect fast, crazy racing because people are going to be motivated, and strong and ready. It's probably going to be one of the more challenging Classics seasons you'll see," he said.