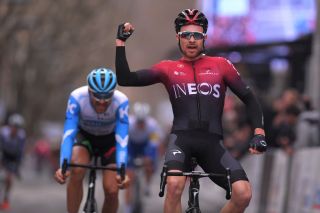 Owain Doull opened Team Ineos' win account for 2020 in Aix-en-Provence after he and three other breakaway men held off a charging peloton in the final stage of the Tour de la Provence. The win promptly propelled Doull to the front rank of favourites for the forthcoming semi-Classics, Omloop Het Nieuwsblad and Kuurne-Brussels-Kuurne.

Doull, second in Kuurne last year, admitted that he "wasn't expecting for the break to stay away.

"But I was super happy in the end. We all worked really well together and it was touch and go, but good to get the first one of the year," he said.

"I knew the run in from last year and it was predominantly downhill and really fast so I thought we had a good chance. Once we got into the last two kilometres, I started thinking more about the sprint and about being tactical."

Familiar with the qualities of two of his fellow escapees, American rouleur Ian Garrison, and time triallist, Mattias Brändle, Doull waited for the right moment.

"I knew Brändle, and I knew Garrison," he said. "I sprint pretty well so it was just about making sure I wasn't too far back at the last corner and watching everybody else make their move.

"Now it's the Classics, and I hope to build on what I did last year. Then hopefully, Paris-Nice and the main Classics like E3, Flanders and Roubaix. I was good last year with second place in Kuurne, so I just want to keep learning and get results or to help the team get results."

Ineos sports director Brett Lancaster described Doull as "mainly a worker," but added that he had been given a free role on the final stage of the Provençal race.

"Owain had a big month in Australia and has come back here and it's paid off. That's our first win and usually it gets the ball rolling again. It's always good to get the first one under the belt."

Doull will now be at the forefront of Lancaster's hopes for Ineos' Classics programme. "Let's see if we can have a good Classics campaign," Lancaster said.

"We've been doing some different work this year around all that, with a different approach.

"If we could just win one Classic," Lancaster said. "We've got some motivated riders this year and we'll attack it full-on. We don't have a Classics team as such but we have a really good group this year so we're optimistic and we want to take it by the horns."

Though largely focussed on stage racing, Ineos have a strong Classics team, with Doull joined by Gianni Moscon, Luke Rowe, Ian Stannard and Dylan Van Baarle as the team's main hopes for the period. The cobbled season kicks off with the 'opening weekend' of Omloop Het Nieuwsblad and Kuurne-Brussel Kuurne on February 28-March 1.

Our first win of the season 👌 Nice one @owaindoull 🐉 pic.twitter.com/DVuRac8vQlFebruary 16, 2020