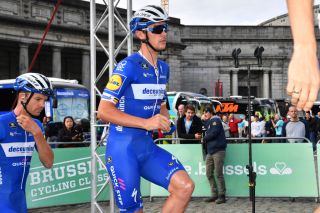 Deceuninck-QuickStep will end their 2019 Belgian campaign Saturday at Binche-Chimay-Binche, but they'll do so without the services of Colombian Sprinter Alvaro Hodeg, who was injured in a crash during the final of Tour de l'Eurométropole on October 5.

Hodeg earned Deceuninck-QuickStep's 66th win of the season earlier this month at Sparkassen Münsterland Giro in Germany and was in the running for the team's 67th win in l'Eurométropole when he  clipped a barrier in the finishing straight and crashed hard. The 23-year-old suffered a left forearm fracture, a right shoulder fracture and two fractured ribs.

Although Binche-Chimay-Binche would have been a good race for the Colombian, the 198.6km one-day race cab also favour the opportunists. Sprinter Danny van Poppel won the race in 2018 for LottoNL-Jumbo, while other past winners include Jasper Du Buyst, Arnaud Demare, Ramon Sinkeldam and Zdenek Stybar.

“We will race again as we always do, and that’s aggressively and with the desire of being there when it matters," said sports director Klaas Lodewyck. "We have several guys who can get a good result, and I’m thinking here of Florian, who proved in the last couple of races that he has a good form, or Yves, who came close to victory in 2018.

"We are ready to give it our best and are really motivated to notch up a good result for Alvaro, whose crash in Eurometropole prevents him from being with us in this race”, Lodewyck said.