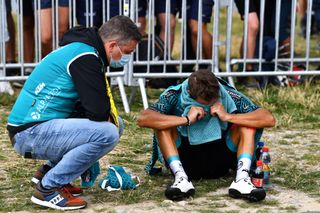 The highest elevation of this year's Tour de France, 2,304m, provided a high dose of intrigue on stage 17 above Méribel at the ski station on the Col de la Loze.

The low point for any rider is not being able to complete the three weeks and ride in Paris on the Champs-Ẻlysées. There have been 25 riders so far who will not finish the full Tour journey, including three riders on Wednesday due to different circumstances.

The B&B Hotels-Vital Concept team saw incredible teamwork well behind the race leaders. While Bryan Coquard was able to finish the stage, Jens Debusschere did not make the required time limit.

While Mitchelton-Scott saw Adam Yates ride to a strong eighth-place finish on Wednesday at the summit of Cole de la Loze and move to fifth in the general classification, the team lost its top domestique Mikel Nieve.

Stefan Küng of Groupama-FDJ did not start stage 17, as the team announced he was leaving to prepare for the UCI Road World Championships next week.

High in the Alps the race for the points classification continues to be a battle. Sam Bennett (Deceuninck-QuickStep) strengthened his lead, even if just two points, over Peter Sagan (Bora-Hansgrohe). The battle may continue until Paris.

Read on for the Tour de France stage 17 news shorts.

Frenchman Bryan Coquard (B&B Hotels-Vital Concept) was the last man standing, so to speak, on stage 17 as he crossed the line at the Col de la Loze 35:45 behind the stage winner. The clocked then stopped and his teammate Jens Debusschere, who had helped him climb the final hors cagetorie mountain of the day, was not able to finish within the time limit. The Tour ends for Debusschere.

Coquard said to reporters after the stage that Debusschere waited for him on the 17.1km climb of Col de la Madeleine and helped him through the entire valley to the steep slopes of the final climb. When the Belgian made it to the vicious final ascent of the Col de la Loze, he had nothing left and finished the stage with the broom wagon behind.

"It is a pity that I have to leave so close to Paris," an emotional Debusschere said according to Sporza. "But it is no different. I came to the team to ride for Bryan and then you have to do everything.

"On the Madeleine I was pretty quiet in the group with Sam Bennett, but Bryan had a hard time and I waited for him. We can't do much here without him, because what's a lead-out without a sprinter?

"In the valley I did everything I could to bring him closer. But at the foot of the final climb that was the end for me. Then he left with my approval. It was over."

In his exhaustion at the conclusion of stage 17, Coquard posted on his Twitter feed, "At the end of the effort. Only one word, Thank you."

Both riders played parts in keeping teammate Pierre Roland in the top 20 through 16 stages. The sacrifice was worth it for the team, according to Debusschere, "In the end, Bryan made it. He does have pain in his knee, but is getting better every day. He has two more chances." Debusschere said.

The team, which had a wild-card entry to this year's Tour, took to Twitter to make several comments about the win-loss situation, including, "The beautiful stories of are also written at the back. At the top of the Col de la Loze, the loses a runner but above all a teammate with unlimited dedication. Thank you!"

The green jersey competition at the Tour de France animated the early kilometres of stage 17, with seven-time points classification winner Peter Sagan (Bora-Hansgrohe) trying to go into a breakaway. There was a chance that the unclassified climb to Saint-Pierre-d'Allevard would allow him to close the distance to Sam Bennett (Deceuninck-Quickstep) in that ranking. However, Bennett has gotten savvier over the course of the Tour de France and never let the Slovakian out of his sight.

When the intermediate sprint arrived, Bennett got a lead-out from teammate Michael Mørkøv, who led long enough to get ahead of Sagan at the line, giving Bennett a further two points over the Bora-Hansgrohe rider. Then he faced the even more difficult challenge of making over two hors categorie climbs.

“It was a tough one today," Bennett said. "I put in a good fight at the beginning, tried to get some points and did it with the help of Michael. Then on the first climb it was quite OK, but towards the end it became harder, as the climb was in steps and the rhythm always changed. But I am glad that I ticked it off and will continue to fight for this jersey."

Bennett leads Sagan by 47 points but still has plenty of work to do to secure the points classification. There is another tough stage in the mountains on Thursday with the intermediate sprint coming after just 14 kilometres into the stage where 20 points are on the line. It will be a hectic start to the stage and another fight to survive the five major climbs afterward. Then there are two more sprint stages on Friday and Sunday with the individual time trial sandwiched between.

Stages 19 and 21 have intermediate sprints worth 20 points and final sprints worth 50, while the sprinters are unlikely to score points in the individual time trial or at the finish of Thursday's mountain stage.

That leaves 160 points maximum still to gain in the final four stages and plenty of time to win or lose the green jersey.

Nieve says pain too much to continue in Tour

Mitchelton-Scott has Adam Yates positioned fifth overall in the general classification after a demanding mountaintop finish on stage 17. With four stages remaining before the conclusion of the Tour de France, and fewer days to gain precious time for a podium finish in Paris, every teammate is important. Yates will have to proceed without his top lieutenant, Mikel Nieve.

Nieve withdrew from stage 17 due to lingering pain from crashes earlier in the race.

This the first time in 19 Grand Tour starts that the 36-year-old Spaniard has had to abandon. In those races, he has finished in the top 10 six times. He has been consistent in helping his teammates as well as finishing each event in the top 25 each time.

At this year's Tour he was riding in 48th position until he pulled out. The former Giro d'Italia King of the Mountains did have a crash in stage 1 in Nice, but was still able to be part of a short breakaway on stage 16.

On Twitter the team stated, "A sad day to see step off the bike. He has been struggling with pain after crashes earlier in the race. He has put on a brave face these last days, but it's time to heal up."

#TDF2020 A sad day to see @NieveMikel step off the bike. He has been struggling with pain after crashes earlier in the race.He has put on a brave face these last days, but it's time to heal up. pic.twitter.com/1OmFxPcXECSeptember 16, 2020

Stefan Küng, the reigning European Time Trial champion, did not line up with his Groupama-FDJ team on Wednesday for the start in Grenoble. Instead, the team reported that they "made this decision with the aim of preserving the European chrono champion for the World Championship of the specialty, which will be held from Friday 25 in Imola."

On stage 14 at the Tour, he was part of an unsuccessful two-man breakaway but was rewarded as the most combative rider on the day. The race against the clock is his specialty, as he is a four-time TT champion for Switzerland. At last year's World's, he took third in the road race, and was 10th in the time trial.

The 2020 Road World Championships were originally scheduled to be held in Küng's home country, but due to COVID-19 restrictions in Switzerland, the UCI moved the elite men's and women's competitions to Imola, Italy and will take place from September 24-27.