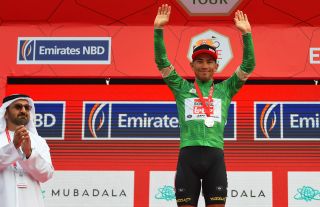 Caleb Ewan (Lotto Soudal) came back from an early crash on stage 4 of the UAE Tour but missed out on a second stage in this year's race after poor positioning cost him.

The stage was won by Dylan Groenewegen (Jumbo-Visma)  who picked up his first victory in the race to draw him level with Ewan and Pascal Ackermann on one win each. Ewan crossed the line in fourth, behind Fernando Gaviria and Ackermann.

The crash that took down Ewan took place in the first half of the stage that saw the peloton battle winds and dust as they raced towards Dubai. Ewan's fall wasn't serious but it was enough to tear his kit and leave him with superficial wounds for the rest of the race.

"I can't really remember what happened," Ewan told Cyclingnews after appearing on the podium in the green jersey.

"I think I was in the bunch and the next thing I remember was a wheel coming across me. I held it up at first but just came down. I don't know what happened. There might have been a twitch in the bunch or something. I didn't see it coming but then I was just taken out."

Ewan remounted and made it back to the bunch, along with several other fallers involved.

"You can never really tell when you get back on the bike because everything is still pumping but from what I can feel so far it's just some skin."

In the sprint, Groenewegen was the dominant force, while several of his rivals made vital mistakes. Ewan admitted that he was caught too far back but added that his error came down to poor positioning on his part, rather than the effects from his fall.

Stage 5 see the race return to Jebel Hafeet with another test for the pure climbers and the  GC contenders. For Ewan, it will be another day in the saddle before the two final days of racing that are likely to finish in bunch sprints. The Australian is relaxed given that he has already won here but like all good sprinters, he's hoping to add to his tally before going home and preparing for Paris-Nice.

"Stage 5 is a bit more stress-free for me but then I have two more chances to come. I'm feeling good. For sure I'm relaxed and it feels good to already have that win. Whatever happens, at least I've got a win but I still want more."