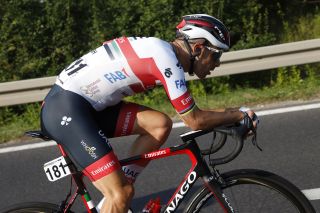 UAE Team Emirates' Rui Costa became Portuguese road race champion after outsprinting W52/FC Porto's Daniel Mestre in the city of Gandra on Sunday. It was Costa's second national road race title, having also won it in 2015. The 33-year-old has also twice been the time trial national champion – in 2010 and 2013 – and was the 2013 road race world champion after winning in Florence, Italy, ahead of Spain's Joaquim Rodriguez.

"It was a very special victory. Rui and Ivo Oliveira rode out of their skin for me today. They both worked hard on the front when it was necessary and got in the right moves," said Costa in a UAE Team Emirates press release, praising his two younger teammates.

"To win here in Portugal is complicated when you have teams with big numbers against us, but we worked it out perfectly between us in the end," he said. "I put in a really hard attack in the final kick and I was happy to finish it off in the sprint.

"This weekend has been a huge success for the team, with Ivo winning the TT [national time title] and me the road race," Costa said. "t couldn't have gone any better."

Vlasov was not present to attempt to defend his title after taking third at Il Lombardia behind Astana teammate Jakob Fuglsang on Saturday.

A handful of national road race championships were staged at the weekend, although a number will take place this coming weekend, a week before the start of the Tour de France, as is normally the case in Europe. Other nations' championships, however, including the British and Dutch road-race-title races, have been cancelled or postponed until further notice due to coronavirus restrictions.