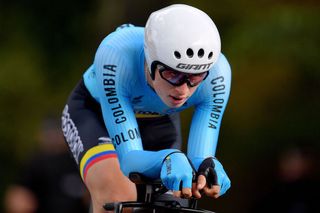 Aside from Quinn Simmons' sensational solo victory, one of the most enduring images of the junior men's road race at the 2019 World Championships was that of Colombia's Germán Darío Gómez, tears in his eyes, advancing on foot after being stranded with a mechanical problem.

The 18-year-old was in the front peloton when his tubular tyre came loose from his rim with just under 80km to go. Somehow, he didn't crash, but his hopes were soon in tatters as he waited for mechanical assistance, and waited, and waited.

Matthews: Sometimes you need to be willing to lose the World Championships to win them

Amanda Spratt: The World Championships road race is going to be a smash fest

Numerous vehicles passed by, but none belonged to his team car, and none to the Shimano neutral service team, which prompted the Colombian federation to later complain to the UCI. Soon, Gómez broke down in tears, a look of desperation on his face, before proceeding to walk along the course, bike in one hand, wheel and tyre in the other.

"In that moment, I was despairing, powerless. I was frustrated and sad, because I felt really good. I was in the group with the favourites, and I could have stayed there," Gómez told reporters in Harrogate after the race.

"When I started to walk, I wasn't really thinking. The adrenaline was at maximum and I must have thought if I walk a few metres it's a few metres less to get back on."

Gómez eventually received assistance from his team car, nearly four minutes after stopping. By that point, however, the front of the race had gone away from him, and he finished in 60th place.

A combination of factors meant that his team car couldn't get to him sooner. Not only were Colombia sharing a car with Chile and Uruguay, they were placed 21st of the 25 cars in the draw for the order of the convoy. Furthermore, the race had just exploded.

After the climb of Kidstones, the peloton had split in two, and there were multiple groups of riders in between, with a number of crashes thrown into the mix – among them a Uruguayan. As such, the UCI commissaires prevented any vehicles from passing riders to move from one group to another.

However, the Colombian team were critical of the UCI for the lack of neutral service provision.

"The ones who should be there at that moment are the Shimano cars," said Colombia's coach, Carlos Mario Jaramillo. "The UCI told us there were four neutral service cars and four motorbikes that would be among the groups, but we saw there was not a single one that went past him. I think the UCI made an error."

The president of the Colombian Cycling Federation, Jorge Mauricio Vargas, soon wrote to the UCI demanding an explanation as to why none of the eight Shimano vehicles were within range. They then received a letter from Pascale Schyns, whose job title was listed as 'Continental Adviser – UCI America Tour'.

"I would like to clarify the following, so that the facts are clear," she wrote. "During the previous 25km, the riders were going very fast, descending Kidstones Bank. The roads, at that point of the course and for around 30km, were very narrow and, considering the danger of letting cars pass, we would have been putting the safety of the whole peloton in jeopardy.

"For that reason, the commissaires decided not to let any vehicles pass from one group to another, whether they were team vehicles or neutral service vehicles. When the conditions improved, they let them pass one-by-one.

"It's a pain this happened to a rider from your country, but the race circumstances made it so. Fate had it that the rider punctured at the worst moment of the race."

The Colombians encountered much support on social media, including from veteran Belgian pro Iljo Keisse, who wrote: "The first cars behind the jury should be neutral service cars that can help everyone! How is it possible that a rider's championship is over because he didn't get a wheel?"

Gómez was smiling by the time he'd reached Harrogate and found himself unexpectedly at the centre of media attention. As one Colombian television reporter rather bluntly told him, "No one knew who you were at the start of the day, but now everyone knows the name Germán Darío Gómez."

"Thank you, sir," replied the 18-year-old. "Ever since I was called up for the national team for the Worlds, the only thing I had in mind was to do my best for the country. During the whole race, I wanted to give 100 per cent of what I had in order to represent Colombia in the best possible way.

"That's what I was trying to do today, but ah well, these are things that happen in races – things that can happen to anyone."