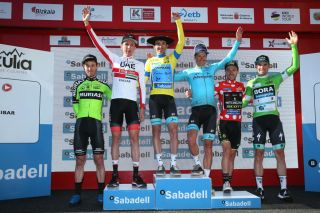 The organisers of the Clásica San Sebastián and Itzulia Basque Country have cancelled their WorldTour events for 2020.

The Basque Country tour was postponed from its early April time slot and organisers hoped to reschedule it for later in the year. But with countries pushing their bans on mass events through the end of August and a crowded three months after the Tour de France, the Basque organisers were left with a risky early-August slot.

“It pains us to communicate this news, because of how hard we have fought to maintain the races on the calendar," Julián Eraso, president of the organisers OCETA said.

Euskaltel returns to cycling as lead sponsor of Fundación-Orbea

"After the announcement of the postponement of the Itzulia, we contacted the UCI directly. The Itzulia Basque Country could have been held during the first week of August and the Clásica San Sebastián disputed on Sunday of that week. But we don't think that it’s the right time to organize a massive event, with everything that is happening."

Spain has had some of the strictest lockdown measures after being hard-hit by COVID-19 starting in March. Riders have not been allowed to train outside and children were on Sunday permitted to leave their homes for only one hour per day for the first time since mid-March.

There have been over 23,000 deaths in Spain attributed to COVID-19, but the number of new cases per day has begun to drop off in recent weeks. The country announced gradual steps to lift the lockdown but organisers of the WorldTour races were unwilling to take the risk to continue with their 2020 efforts.

“Our races mobilize thousands of people inside and outside the events. In light of this situation, we cannot contribute to a new resurgence and propagation of the virus," Eraso said.

"Furthermore, we do not feel that it is the right time to ask the town councils and other institutions for assistance. It’s time to give back to society part of everything that it has given us over so many years, and we prefer that the money allocated for the race by the institutions be invested in getting back to normal and saving lives."

With the Olympic Games postponed, the UCI's 2021 calendar is still under discussion. The OCETA are now focussing on holding the races in 2021, with the Itzulia tentatively scheduled for April 5-10, 2021 and San Sebastián on July 31.