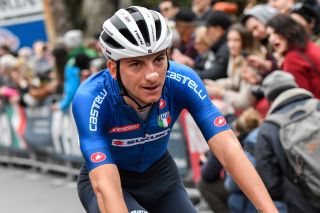 Giulio Ciccone's victory at the Trofeo Laigueglia made little impact during a busy weekend of racing, but the sight of the 25-year-old winning in Italian national team colours in the opening race of the Italian calendar was hugely symbolic for il Bel Paese and highlighted the emergence of the next generation of Italian male riders.

Ciccone's new Trek-Segafredo teammate Vincenzo Nibali stands out as the most successful Italian rider of his generation, with Elia Viviani, Alberto Bettiol, Fabio Aru, Davide Formolo and Matteo Trentin also flying the tricolore flag for Italy. But a number of doping scandals, the lack of a men's WorldTour team since 2016 and the globalisation of cycling in the last decade have weakened Italian cycling.

Ciccone sees only benefits in Nibali's arrival at Trek-Segafredo

Italian women's cycling is proportionally stronger than the men's sport, with the Alé BTC Ljubljana team in the women's WorldTour and Marta Bastianelli, Letizia Paternoster, Elisa Longo Borghini and Elena Cecchini hugely successful. However, there is growing enthusiasm for a new generation of promising young Italian male riders. Tuesday's La Gazzetta dello Sport headline said it all: 'Italia, the wheel has turned. Ciccone leads a golden generation, finally it's a new start'.

The Italian sports newspaper listed many of the next generation of 20 or so Italian riders who have stepped up to WorldTour level in 2020 or have shown they are world class at under-23 level.

Ciccone leads the new generation at 25, and he confirmed his potential in 2019 by winning a stage at the Giro d'Italia and then wearing the yellow jersey at the Tour de France. La Gazzetta dello Sport describes his coming time under Nibali's wing at Trek-Segafredo in 2020 and 2021 as a Master's degree in Grand Tour racing.

There are others further down the development pipeline. Junior time trial world champion Antonio Tiberi will ride for the Colpack Ballan Continental team this year but he is already under contract with Trek-Segafredo for 2021, while 20-year-old Giovanni Aleotti, who finished second at the Tour de l'Avenir, will again ride for Cycling Team Friuli ASD before stepping up to professional level. The newspaper also lists Alessio Martinelli, Andrea Piccolo, Alessandro Fancellu, Antonio Puppio and Alessio Acco, who ride for Alberto Contador-Ivan Basso development team.

"Italy is the only country with seven under-23 riders in WorldTour teams and there are 11 of our riders among the 100 youngest riders. That means our development base works," Italian national coach Davide Cassani suggested to La Gazzetta dello Sport.

"It's true we don’t have a men's WorldTour team and only three ProTeams, but we do have 55 riders in WorldTour teams, meaning that we're behind only France."

Cassani helped to revive the Under-23 Giro d'Italia and the Italian track team, and he has pushed the leading teams to step up to Continental level rather than chase easy success in local races. Cassani regularly leads an Italian national team at races in Italy, giving leading riders an extra race when needed and offering vital experience to younger talents.

"Stepping up to the WorldTour isn't always the best choice. If the rider isn't ready then they'll just end up filling holes and eventually lose their place. Ciccone was a climber, and so suffered in the early years, but he developed gradually at Bardiani and is now ready to compete with the best at WorldTour level. Let's hope this next generation follows in his slipstream."