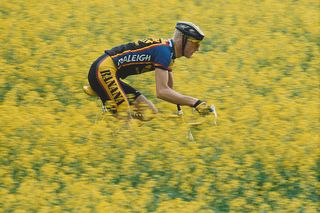 The Dave Rayner Fund – now to be called The Rayner Foundation after having been awarded charitable status – was created to honour the memory of the British pro rider, who died in 1994, and to help other young riders to live and race abroad (Image credit: Getty Images)

The Charity Commission for England and Wales has awarded charitable status to the Dave Rayner Fund, the new charity has announced in a press release. The fund was set up in 1995 – in memory of British rider Rayner, who died at the age of 27 after an altercation outside a nightclub in Bradford, Yorkshire, in 1994 – to help young riders with the cost and undertaking of racing abroad.

Dave Rayner book extract: I can't remember him ever being on a downer

"Being awarded charitable status has been a brilliant achievement and will ensure that we can further enable riders to progress in the sport of competitive cycling, whether that is on the bike or off it," said one of the founders of the fund, Keith Lambert, who was Rayner's team manager at Banana-Falcon in 1990, and is now the manager of the British under-23 squad.

"The assistance we are able to provide is financial, but it also takes the form of advice, mentoring and mental support to inspire, empower and support the next generation of athletes so they can achieve to the best of their ability.

"We hope this fantastic boost for the fund will help us to encourage more women and riders from under-represented groups to engage in the sport."

Rayner turned professional with British team Interent-Yugo in 1987, and in 1988 moved to the Raleigh-Banana squad, and subsequently Banana-Falcon in 1990, with whom he won the Scottish Provident League series.

For the 1991 and 1992 seasons, Rayner moved to the Netherlands to join one of the world's biggest and most successful squads, the Jan Raas-run Buckler team, where he was teammates with the likes of Edwig Van Hooydonck, Frans Maassen and Jelle Nijdam. He then spent a season in the USA riding for IME-Health Share in 1993 before returning to the UK to ride for Lex-Townsend in 1994.

To further help raise money in his memory, some of the biggest names in the sport have attended the annual Dave Rayner Fund Dinner over the years, and this year Adam Yates will be the guest of honour when it takes place at the Royal Armouries in Leeds on Saturday, November 23.

More information on both the dinner and the charity can be found at daveraynerfund.co.uk