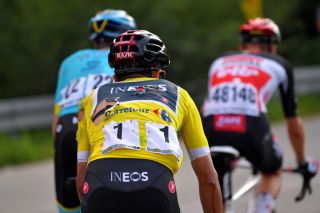 Richard Carapaz (Team Ineos) is out of the Tour de Pologne as a result of the crash he suffered while wearing the leader's jersey on Saturday's stage 4.

The Ecuadorian crashed mid-way through the hilly stage, hitting the tarmac on his right-hand side. He got going again and rejoined the peloton, but lost his torn yellow jersey when Remco Evenepoel embarked on a 51km solo win.

Carapaz, who'd taken the overall lead with a win on Friday, went on to finish the stage, placing 16th, 3:21 down on Evenepoel, and dropping to 16th overall. On Sunday morning, the decision was taken not to start the fifth and final stage as a 'precautionary measure' ahead of next weekend's Il Lombardia.

"Richard was feeling some pain after the crash so at this stage it’s better we give him some time to recover and not start today’s stage," said sport director Matteo Tosatto.

"It’s the best solution for him, as from here he goes on a Giro [d'Italia] recon and then on to Lombardia – so looking at the bigger picture it is best for him to rest."

Tour de Pologne stage 4: Remco Evenepoel in a league of his own

"Richard has some skin loss from the crash as well as muscular soreness, mostly around the right side of his abdomen and his right hip," Park said. "It looks like he caught some handlebars in the crash which has caused some contusion and bruising. We’ll continue to monitor him throughout his recovery.”

Team Ineos will start the final stage with five riders, as Ian Stannard dislocated his shoulder in the same crash. The Briton was taken to hospital for scans and will return to tthe UK for specialist treatment.

"Ian dislocated his right shoulder in the crash. It was not easy to deduce initially so we had to take him to the hospital for extra assessment, x-rays and a CT-scan," said Park.

"He will now travel back to the UK where he’ll be assessed by a shoulder specialist. We’ll get a second x-ray after the reduction to see if everything looks okay. That second scan will tell us more about the nature of the injury."