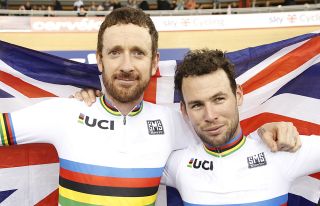 Bradley Wiggins and Mark Cavendish have voiced stinging criticism of British Cycling, with Wiggins saying the national federation is currently lacking 'someone who knows what they’re talking about'.

Wiggins, who won five Olympic gold medals and eight world titles for Great Britain during his career, was speaking to Cavendish, winner of four world titles across the road and track, in another round of their Q&A sessions on Instagram at the weekend.

Conversation turned to the Olympic Games, originally scheduled for this summer before the conronavirus pandemic forced their postponement, and to Cavendish’s exclusion from the Great Britain squad.

Cavendish had hoped to earn a place in the track team to ride the Madison and finally win an Olympic gold medal. However, he was not selected for any of the Track World Cup rounds over the winter, nor the World Championships, and therefore failed to meet the qualifying criteria for the Games.

"It’s hard for me to go. British Cycling have been… they realised now they don’t want to be in the position where they have to not take me," Cavendish told Wiggins in their Q&A.

"They said to me: 'You haven’t done any World Cups'. When have I had to do World Cups? Remember when we used to go to World Cups coming off holiday? We came off holiday in Thailand once and went to Beijing and medalled in the World Cup."

Wiggins, who won a Madison world title with Cavendish in 2016, then turned the screw.

"That’s the thing that’s lacking now in British Cycling: someone who actually knows what they’re talking about. It’s all about box ticking," the former Tour de France champion said.

Since Wiggins retired in 2016, the governing body of the sport in the UK has undergone significant change in the face of a series of damaging episodes, from sexism and bullying allegations to the Fancy Bears leaks that revealed Wiggins’ use of Therapeutic Use Exemptions. CEO Ian Drake and leading coach Shane Sutton both resigned, while endurance coach Heiko Salzwedel was abruptly sacked under the new leadership of CEO Julie Harrington and performance director Stephen Park.

"With you [Cavendish], it was just a case of opening a few doors so you could get qualified, knowing you would deliver on the day, which you do and always did - three world titles, Olympic medal and all that," Wiggins continued.

"That’s sort of been taken away now. They’d rather someone qualified for all the World Cups, then finished 10th in the Olympics. I think it’s shit, to be honest, but hey, cycling has changed so much."

Cavendish then expressed his opinion that the Madison – the event he’d hoped to ride in Tokyo – had been ruined by the UCI, who changed the rules at the end of 2016. The number of sprints in the 200-lap race has doubled to one every 10 laps, while gaining a lap now merely earns bonus points, rather than automatically putting you ahead of the field.

"The Madison has changed anyway, and I don’t agree with that. The irony is, they say the Madison is not the same as it used to be, but actually the Madison now better suits the road riders. That’s the stupid thing – they fucked the Madison up, the UCI," Cavendish said.

"In my first World Championships with Rob [Hayles], we won it with zero points. No other team got a lap. We got no points but we got a lap. But now it’s like a points race. A 200-lap race with sprints every 10 laps… it’s just one speed, there’s no time to recuperate or get back in position. It actually suits a road rider more but it’s chaos to watch."

In what must have been awkward viewing for those at British Cycling, the pair ended their conversation by revealing how they’d been asked to return equipment with which they’d won major titles.

Pointing the camera to the bike he rode to the Olympic time trial title at London 2012, Wiggins said: "They didn’t have a choice with me. I’m fucking taking it, it’s mine, I fucking did it, I’m having it."

Cavendish then said. "I’ve still got a skinsuit, but they took the skinsuits back. What are we going to do? Show it off to people and say ‘copy this’?"

Wiggins added: "I’ve still got my skinsuit as well, yeah. They’re not having it. Fuck off. Try and get it from me. They try and take it back and it’s like, well, we did it, we grafted. 'But no, we want to shred it...' Fuck off. Shred it? These are my memories."