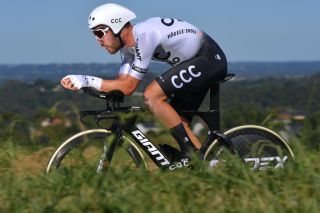 Patrick Bevin was in the hot seat for the better part of 90 minutes, leading the Vuelta a Espana stage 10 time trial in Pau, France, on Tuesday, hoping to win his and the CCC Team's first Grand Tour stage. However, the Primoz Roglic steamroller smashed those hopes flat when he came across the line as the second-to-last rider with a time 25 seconds faster than Bevin.

It was a familiar scenario for Bevin, who lost last year's Itzulia Basque Country time trial to Roglic, and for Roglic, who claimed his fourth Grand Tour time trial win.

"It's disappointing, but Primoz has been the form TT rider all year so, to win here you had to be really good because he's been the benchmark all season," Bevin said. "Second is second. I've been here before and sat in a few hot seats and had him come over the top, but that's bike racing. I'll be chipping away and I will get one eventually."

Bevin led the stage over Remi Cavagna (Deceuninck-QuickStep) by two seconds for much of the day, watching as riders pushed too hard on the first climbs of the course and then suffered in the last leg. Until Roglic, that is.

"You had to have power all day. It was quite hard to start off like that, though, with the 2.5km climb, so it was about making sure you had a bit of reserve left and, overall, it was about delivering a performance of over 47 minutes. There was no hiding and nowhere to recover.

"It was a super-hard course. I knew, having ridden it, that it was a tough one to read, and that it could go towards the climbers, but Primoz is not a pure climber, and he's been the best all year in time trials," Bevin said.

"I'm pretty disappointed with second, really, as I came here with this one stage marked. But, for me, getting this stage out of the way opens up the second part of the race. I've been trying to build my form and get my racing legs back over this first part and now we will look towards the rest of the race and target some more stages."

Bevin could take some solace in the fact that he made it to the time trial and had a good showing after missing out in the Tour de France when he was the first rider forced to abandon with broken ribs from a crash on stage 4.

"It's been a rough season for me and I've turned it around in the back end with an eye on the Worlds, so to have strong legs 10 days into the Vuelta is good, but obviously you always want a little bit more. We will keep working, go back to the drawing board and keep pushing."