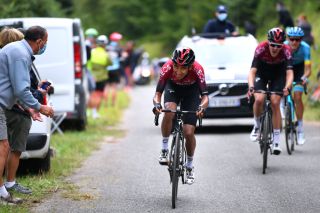 Team Ineos continue to look for the winning combination from their powerful squad ahead of the Tour de France, reuniting La Route d'Occitanie winner Egan Bernal with runner-up Pavel Sivakov in their team for the Critérium du Dauphiné, which gets underway on Wednesday.

Sivakov helped Bernal forge a winning gap on the Col de Beyrède on stage 3 of the La Route d'Occitanie and was key to protecting the Colombian's margin on the final stage to Rocamadour.

The 23-year-old's presence at the Critérium du Dauphiné will be a boon after Ineos took a beating at the hands of Jumbo-Visma in the uphill finishes of the Tour de l'Ain this weekend.

Down to five stages from its usual eight, the revised edition of the 2020 Critérium du Dauphine starts on Wednesday with a tough 218.5km stage that features seven classified climbs and a finish 1.5km after the top of the category 4 Col de la Gachet.

The stage is only a warm-up for a furious 135km stage 2 summit finale to the top of the Col de Porte and the high altitude battle over the Col de Madeleine to another mountain top finish at the Montée de Saint-Martin-de-Belleville on stage 3.

A third straight uphill finale comes on stage 4 to the Montée de l'Altiport in Megève, which is preceded by the Montée de Bisanne. The final stage has the same finishing climb but features a total of eight ascents, including the Col de Romme and Col de la Colombière.

With so many mountains and so little time before the Tour de France, the Critérium du Dauphiné will be a proving ground for Froome, who showed a glimmer of his old self with a vicious turn on the Grand Colombier at the Tour de l'Ain. Both Froome and Thomas held their cards close to their chests in the race, however, dropping out the back after working for Bernal.

Froome will need to prove to Ineos manager David Brailsford that his lengthy and difficult rehabilitiation from the devastating injuries suffered during last year's Dauphiné have not taken away his ability to contend for a Grand Tour. He will also need to demonstrate that his loyalties still remain with the team despite his impending move to Israel Start-Up Nation next season.

The race will also be key for the rest of Team Ineos' selection for the Tour de France, not only deciding which riders will be GC leaders but also selecting the important support riders.

Costa Rican Andrey Amador, who raced both Route d'Occitanie and Tour de l'Ain, has been left off the roster for the Dauphiné but remains as an alternate along with Tao Geoghegan Hart, who crashed out of Tour de l'Ain.

Castroviejo arguably outshone Froome and Thomas in Tour de l'Ain, while Luke Rowe, who raced in support of Richard Carapaz at the Tour de Pologne, is another strong prospect for Tour selection.