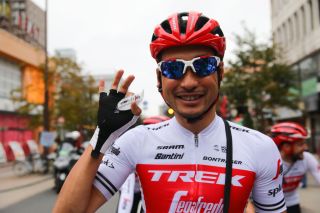 Fumiyuki Beppu has broken his contract with Trek-Segafredo and will leave the team at the end of 2019, though it is not yet known who he will ride for in 2020.

The 36-year-old Japanese rider, who joined the US-registered team in 2014, signed a two-year contract extension this time last year, highlighting his ambition to ride the Olympic Games in his home country next year.

However, Trek-Segafredo released a statement on Thursday morning announcing that Beppu is leaving at the end of this year.

"I am very grateful for the opportunity Trek-Segafredo has given to me and cannot thank the organization enough for the last six years," Beppu said.

"I have been in the Trek family from the beginning, so it is not an easy decision for me to leave, but it was time for me to take a new direction and new challenges. I want to thank everyone in the team, all the staff, teammates, and sponsors who supported me over the years. It has been a very special time in my career that I will never forget."

Beppu came to Europe to begin in professional career in 2005 with Discovery Channel, spending three seasons there before two apiece at Skil-Shimano, Radioshack, and Orica-GreenEdge. He joined Trek in 2014 and has been there ever since.

Beppu has spent his career riding as a domestique. His only victories have come on Japanese soil, with five national titles across road race and time trial, and two wins at the  Japan Cup criterium.

"Fumiyuki always played as a fair and loyal teammate, and we would like to thank him for that," said Trek-Segafredo manager Luca Guercilena. "We wish him a bright future on his new challenge."