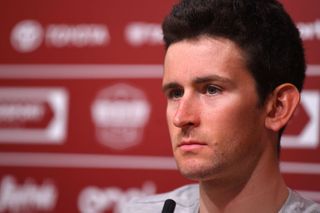 Tiesj Benoot is focused on performing at the spring Classics for new team Sunweb in 2020, having joined from Lotto Soudal (Image credit: Getty Images Sport)

Team Sunweb's Tiesj Benoot says that he can't wait to start racing, having spent the past three weeks training on Mount Teide, in Tenerife, Spain, in readiness for the start of the spring Classics, which kick off with the Omloop Het Nieuwsblad on February 29.

"I've been itching to start racing these past few days," Benoot told Sporza.be on Tuesday, still waiting to make his first competitive pedal stroke for his new team, Sunweb, who he joined this season following five seasons with Lotto Soudal.

"The early season preparation races are not that important. If you race well at the Tour of Mallorca, for example, you won't still be talking about it a week later," he said. "I still won't be at 100 per cent there at the Omloop, but I want to try to be up there and do something for the Belgian fans."

Due to there being only one hotel in which to stay on Tiede, Benoot said that he'd run into a number of other riders using the climb, and the altitude, to ready themselves for spring.

Benoot: It's like the first day of school at Sunweb

"Edward Theuns, Jasper Stuyven [both Trek-Segafredo] and Laurens De Plus [Jumbo-Visma] have already been and gone," he said of his fellow Belgians, "but Wout van Aert is still here."

"And also riders from Astana, Groupama-FDJ and Bahrain McLaren," he said. "We sometimes talk a bit, but we don't often talk about racing."

Benoot revealed that he'd originally planned to train in South Africa ahead of the season, but changed his plans when an opportunity arose to head to the Canary Islands.

"When a few spots became available here at the hotel on the Teide, I didn't hesitate. Here, you can gain a lot more altitude during training rides," he explained.

'I'm working harder here than I ever would in Belgium'

According to Sporza.be, 25-year-old Benoot's been averaging weekly distances of around 750km, including a 196km, seven-hour ride last weekend that saw him gain more than 4,700 metres of altitude.

"I'm working harder here than I ever would in Belgium," he said, "because here you're only focused on training and recovery. On the Teide, you can do nothing but focus on cycling."

If he could, said Benoot, he'd be on a similar altitude training camp in the weeks leading up to one of his biggest goals, the Tour of Flanders, which takes place in early April.

"But the racing programme doesn't really allow you to do that ahead of De Ronde," he said, "as there are just so many other Flemish races in the spring."

The Belgian website also listed Benoot's spring racing programme, starting with the Omloop at the end of February, and continuing on March 7 with Strade Bianche – which Benoot won in 2018 – and followed by Italian stage race Tirreno-Adriatico, from March 11-17.

He then returns to Flanders for the E3 BinckBank Classic and the Dwars door Vlaanderen, just ahead of the Tour of Flanders, on April 5, and will then finish his spring campaign with Amstel Gold (April 19) and Liège-Bastogne-Liège (April 26).