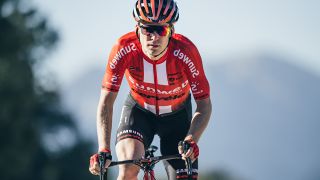 The Circus-Wanty Gobert-Tormans team announced it has signed 33-year-old Jan Bakelants as the final rider of a 26-man team for this season.

The Belgian, who wore the yellow jersey during the 2013 Tour de France, moves across after one year with Team Sunweb. He ended four seasons with AG2R La Mondiale in 2017 with a terrible crash in Il Lombardia, going over the barriers and into a ravine on the descent of the Sormano that left him with four fractured vertebrae and seven rib fractures. He said he is 1cm shorter from the crash.

He joins Simone Petilli – who also went over the edge in that same crash – in the team for 2020. Petilli moves from UAE Team Emirates, while Danny van Poppel joins from Jumbo-Visma. Two Roompot riders – Maurits Lammertink and Boy van Poppel – and cyclo-cross racers Quinten Hermans and Corné Van Kessel and Australian Alexander Evans are the rest of the newcomers to a team that retained all but six of their 2019 roster.

Team manager Hilaire Van der Schueren was pleased to sign Bakelants as a mentor for the team's younger riders as it pursues big ambitions for the 2020 season.

"I noticed his big motivation during the conversations we're having since October. We strongly believe in his added value; he'll show the ropes of the pro peloton to our young neo pros and he'll assist our older riders in the classics and hopefully the Tour de France," Van der Schueren said.

Bakelants, Petilli, Martinez injured in crash into ravine off Sormano

Bakelants unsure if he will race again after crash and surgery

Bakelants could be back on the bike in the new year

The Belgian team was the top-ranked Pro Continental team at the end of the 2019 season and is looking to score wildcard invitations to many of the major WorldTour races in 2020, including the Tour de France.

Bakelants is looking forward to having opportunities to race in the attacking style that suits him best and says the team was a perfect fit. "I want to become the rider I was in an environment in which an aggressive riding style is preferred," he said.

"The exciting race calendar with an extensive WorldTour programme of this Belgian Pro Team is very attractive. I'm looking forward to share my experience with my new teammates and to perform at the Tour of Catalonia and the Ardennes classics. I'm very motivated to get started and to be a part of the team's success."