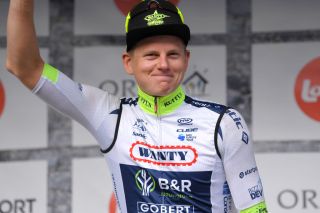 Aimé De Gendt and Wesley Kreder will stay with Wanty-Gobert until at least the end of 2021 after both signing contract extensions, the team has announced.

The Belgian Pro Continental team – which will be known as Wanty Gobert-Tormans in 2020 – has extended both riders' contracts by another year, although neither rider was originally out of contract until the end of 2020.

"I feel very good with Wanty-Gobert, and was happy with the team's proposal for a contract extension, proving our mutual appreciation," he said.

"I hope to make further progression next year, and expect the team to do the same, as the transfers that have been made look promising," said De Gendt, whose other outstanding results this season included second at Le Samyn and sixth place at Paris-Tours, while he was also rode – and finished – the Tour de France, which was his first Grand Tour.

"It looks like we'll be at the start of the Classics [in 2020] – the big races that suit me best – with a solid team. I'm looking forward to next season with a lot of confidence," he said.

Wesley Kreder – the younger brother of retired pro Dennis Kreder and cousin of current pros Raymond Kreder (Team UKYO) and Michel Kreder, who will retire at the end of this season – joined Wanty in 2014, but then spent the following two seasons with Raymond and Michel at Dutch Pro Conti team Roompot-Oranje Peloton, winning a stage of the 2016 Ster ZLM Toer.

He returned to Wanty in 2017, and has remained there since, specialising in one-day racing, and from 2020 will form part of a new sprint train with Dutch brothers Danny and Boy Van Poppel, who will both join the team.

"Having my contract extended until the end of 2021, even though I still had a contract for next season, has given me a lot of confidence. I'm happy that the team's pleased with me, so I'll keep working as I always do," Kreder said in a press release.

"I'm very happy that the dream I shared with Danny and Boy Van Poppel to represent the same team will become reality," the 29-year-old added. "We became good friends when we were teammates at the Rabobank Continental team and Vacansoleil-DCM, directed by Hilaire Van der Schueren [now Wanty sports director].

"Both Boy and I know Danny's [sprint] capabilities, although he didn't always show them. Wanty Gobert-Tormans gives us the opportunity to make this happen for the next two seasons," said Kreder.