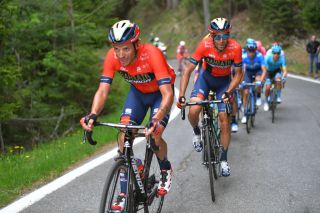 Several riders and staff at the Bahrain-Merida WorldTour team are still waiting for two winter salary payments after a 'process issue' sparked a series of delays to the team's payroll.

Team management told Cyclingnews they are trying to resolve the situation as rapidly as possible and intend to improve processes as part of the team's ownership transition.

Teams sometimes struggle to be timely with payments, perhaps when a sponsor or backer fails to respect an agreed payment schedule or unexpected costs arise. However, Cyclingnews understands a number of Bahrain-Merida riders and staff are becoming concerned as the Christmas holidays near and salaries repeatedly fail to arrive.

The Bahrain-Merida team refused to confirm any outstanding wage figures but were confident that the matter would be resolved imminently. They insisted the funds were in place but had been delayed.

"We have identified a process issue that has caused a payment delay to some team members and are working to remedy this as a priority," the team told Cyclingnews in a statement.

"Those individuals affected have been communicated with directly by the team. We expect this to be resolved imminently and regret any inconvenience.

"As part of the team's ownership transition, we are simplifying the processes to ensure clear and sustainable governance for the future."

The UCI confirmed to Cyclingnews that it is aware of the situation but appears satisfied the delay in salary payments was caused by complex transaction processes and is a temporary problem.

A similar payment process problem arose last winter at Bahrain-Merida, with then team leader Vincenzo Nibali agreeing to a payment freeze of his significant salary for several months to free up funds so that other riders and especially hardworking team staff could be paid. All the wages were eventually paid.

Nibali will join Trek-Segafredo for 2020 but as per UCI rules, his contract with Bahrain-Merida only ends on December 31, with salary payments spread across 12 months rather than the racing season. Nibali and his entourage refused to discuss the subject of Bahrain-Merida's unpaid salaries when contacted by Cyclingnews but he was critical of the other aspects of his time on the team in an exclusive interview published on Thursday.

A number of different sources informed Cyclingnews of the salary payment problems.

Last week the UCI confirmed that Bahrain-McLaren had secured a WorldTour licence for 2020 after successfully completing the complex application process in recent months.

Teams have to submit budgets, bank guarantees and pass financial checks by external auditors. The UCI confirmed that Bahrain-McLaren's application respected the stringent administrative, ethical, financial, organizational criteria. The delay in salary payments concerns the 2019 team and not the 2020 team, which will operate under a new ownership and governance structure.

Bahrain-Merida will be known Bahrain-McLaren in 2020 after the sports car; technology and motor racing company took a 50 per cent stake in the team. McLaren, like the other half of the cycling team, is controlled by Mumtalakat, the sovereign wealth fund of Bahrain, who own a majority stake in the McLaren Group.

Last week the team unveiled their new orange and red colours and talked enthusiastically about their future ambitions after the shake-up of the team under Ellingworth.

The Bahrain-McLaren riders and staff are due to gather in Croatia next week for a winter training camp.