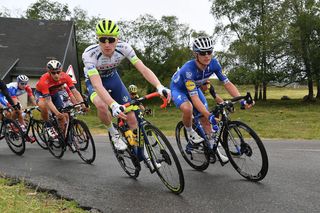 Wanty-Gobert's Frederik Backaert has signed a two-year contract to join French team B&B Hotels-Vital Concept from next season. The Belgian will add firepower to the team's Classics squad, in particular, and says that he'd like to win the Tro Bro Léon, where he finished second in 2017.

Coquard: I lost confidence in myself, I was scared of other sprinters

Backaert has spent the past six seasons with Wanty, having joined then at the start of his pro career in 2014, winning a stage of the Tour of Austria in 2016.

The 29-year-old's best result this season has been fourth place at the Tour du Finistère in April, just ahead of finishing 10th at the Tro Bro Léon. His second place at that event two years ago is something that Backaert says he'd like to improve on with the Brittany-based Pro Continental team in 2020, which will switch around its naming sponsors from Vital Concept-B&B Hotels to be known as B&B Hotels-Vital Concept next year.

"I had contacted the team last year, but it was a little late, and their roster was already full," Backaert explained in a press release regarding joining the team. "This time, [manager] Jérôme Pineau came back to me at the beginning of July, and I knew that it was going to happen.

"I have Breton friends, I love the local mentality and my dream is to win the Tro Bro Léon to leave with the famous pig," he said, referring to the live pig that is given as a prize to the winner of the race that takes in long sections of gravel, or ribinoù, as it's called locally.

"I want to be good for the Classics, and from the Omloop Het Nieuwsblad at the beginning of February until the Tro Bro Léon at the end of April, I'll be giving it 100 per cent.

"I know the Flemish roads like the back of my hand, and the climbs there by heart," he continued. "I know how much pressure to put in the tyres according to the conditions, and so I'm looking forward to guiding the younger members of the team on those roads.

"I'm also looking forward to working for a sprinter like Bryan Coquard," said Backaert, who rode and finished his second Tour de France this year. "We know each other well through racing, and I'd like to be able to contribute to his future successes. He's one of the world's best, he knows how to win and is able to win stages in week-long races. I may not be one of his lead-out men, but I can't wait to ride for him."

While Wanty-Gobert will lose Backaert's services next year, the Belgian Pro Continental team – which will be called Wanty Gobert-Tormans in 2020 – announced that it had re-signed 26-year-old Belgian Ludwig De Winter and 33-year-old compatriot Thomas Degand for next season.