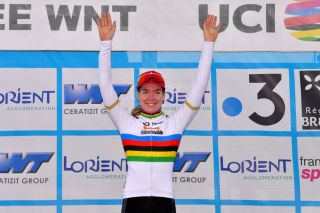 Anna van der Breggen will line up as the defending champion at the elite women’s road race at the UCI Road World Championships in Yorkshire on Saturday. She’s one of a series of favourites to win on the punchy, Classics-style parcours, but told Cyclingnews that if she doesn’t succeed, she’s had a memorable year in the rainbow jersey.

"I’ve enjoyed it a lot," Van der Breggen told Cyclingnews in an interview held in Harrogate two days before the race. "I still trained as usual and raced my races. But just being able to ride in the rainbow jersey, to think back on that great race, was really nice."

Van der Breggen won the world title at last year’s event held on a mountain route in Innsbruck, Austria. She rode away from the field on the decisive climbs and soloed to victory ahead of Australia’s Amanda Spratt and Italy’s Tatiana Guderzo.

It was her first victory in the elite women’s road race, which had previously been seen as a glaring void on her illustrious resume that also includes the gold medal at the Rio Olympic Games, twice overall victory at the Giro Rosa and five-consecutive wins at Flèche Wallonne.

"Maybe it’s a once in a lifetime opportunity," van der Breggen said. "I really enjoyed everything. The year is over, but I’m going to try it again, with a bit less pressure. It’s difficult to look back on a victory and really enjoy it but wearing a jersey makes you think about it more and I could enjoy wearing the jersey."

The women will race 150km starting in Bradford and travel as north as Masham in North Yorkshire before looping back south toward the three undulating finishing circuits in Harrogate.

Many believe the course suits Vos to perfection, but it would be remiss not to consider Van der Breggen and van Vleuten. They are both exceptional Classics riders, and are most notably breakaway specialists. Either of them could force a winning breakaway or win solo, regardless they will make the race as hard as possible.

Rain is expected in the forecast for the women’s race which could create a more dangerous scenario, particularly on the technical Harrogate circuits at the finish. Van der Breggen said the key to racing well in the rain is to strike a balance between speed and safety.

"Rain always makes it more dangerous," she said. "There are some tricky downhills in the local lap, which will already be difficult with a big bunch, but especially if it’s wet it’s more dangerous. So far, it doesn’t look too slippery and not many people slide. If you do it safe, of course everyone wants to go fast, but if you find a good balance between safe and fast it shouldn’t be a problem."