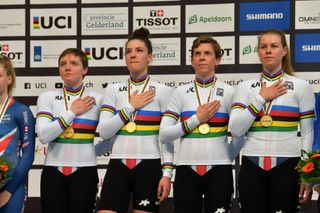 "Today I announce my departure from competitive cycling," Geist wrote in a statement issued by USA Cycling. "When I started, no one in my family was involved in the sport or was particularly sporty, no one knew what a 'velodrome' was or that the discipline of track cycling had a storied history in the area in which I was born and raised. No one knew that I would grasp the opportunity to add to that story; certainly not that it would be the major focus of my life for the next 23 years."

Geist was born in Emmaus, Pennsylvania, where she grew up racing on the Leigh Valley Velodrome, now called the Valley Preferred Cycling Center, in nearby Trexlertown.

She raced professional on the road for American UCI teams Victory Brewing and later Team Lipton. During that time she won the prestigious Meiji Reoch Best Young Rider award at the Liberty Classic in Philadelphia, a race that was part of the women's WorldCup.

Geist was involved in a horrific collision with a tractor trailer while on a training ride in the summer of 2007. She fractured six ribs, several vertebrae, her sacrum, and pelvis, and her lungs had partially collapsed. It took nearly a year to fully recover but she returned to racing to win the elite Individual Pursuit at the US National Championships in 2008.

"Kim has had an amazing career. Being a member of one of the greatest Women’s Team Pursuit teams of all time,” said Gary Sutton, USA Cycling Women’s Endurance Track Coach. "One of the ultimate professionals of all-time on and off the bike, I am so pleased to hear she is going to get more involved with her coaching business and continue to help develop our sport. I wish her all the very best for the future."

Geist has an Undergraduate degree in Exercise Science and Masters in Sports Nutrition, and coaching cyclists through Kim Geist Coaching.

"Kim Geist represented the U.S. National Team, our nation and the sport with dignity and class. She put her heart into every practice and competition, setting the bar for teammates,” said Scott Schnitzspahn, USA Cycling’s Vice President of Elite Athletics.

"As an athlete, Kim inspired everyone around her, now in her next chapter, as a coach, she will continue to be an inspiration to the next generation of U.S. cyclist."

"Today I announce my departure from competitive cycling.  When I started, no one in my family was involved in the sport or was particularly sporty, no one knew what a 'velodrome' was or that the discipline of track cycling had a storied history in the area in which I was born and raised. No-one knew that I would grasp the opportunity to add to that story; certainly not that it would be the major focus of my life for the next 23 years.

"Over these 23 years, I have had an intense passion for the sport of cycling. I was recently asked whether or not I knew from day one that I would be on a path to accomplish major results in the sport. My answer was simply, 'Yes.' I knew from the start that this sport was for me, not necessarily because I had an immediate natural talent for it, but because it presented itself as so uniquely dynamic and challenging on so many levels.

"That sparked a drive in me to try to master it, something that fueled me every day in my preparations, from studying the racing every opportunity I could to beating up on the boys as a junior to earning world championship titles as a senior. But aside from this driven attitude toward the sport, what gave me longevity was such a strong enjoyment of the process. I have truly enjoyed the process of forming the discipline it takes to try to better myself physically and mentally every day, to try to be among the best.

"Today I can very honestly say that I have lost the fun and the enjoyment I have had for the process. I love riding my bike and the people who supported me in doing this, but the daily process of living as a competitive athlete no longer ignites that same spark.

"I, therefore, know it is time for me to stop competing. The one accomplishment I truly hope I have achieved before my close is inspiring a new generation of cyclists to ignite their own sparks. Study, prepare, train, and compete to the best of your abilities and know that you, too, will be remembered for your good days, but that it is the fun that you create and overall your enjoyment in the sport that will get you through the more numerous lesser days.

"I can look back on my career and remember so many good days filled with training and competition. As I close the door on those, I am opening the door to so many new good days. I am already involved in many activities related to the sport that I enjoy doing as much as I did first turning those pedals over on day one. I am looking forward to putting the energy and drive I put toward competitive cycling into new ventures within the sport.  I am looking to get involved even more and give back to my community, which has given so much to me.

"There are too many people to mention in my community for helping me to progress and in helping to keep my spark alive. Chances are that if you have ridden with me, raced with me or competed against me, you have played a part and I am thankful for that. If you have told me that I could do it or you told me that I couldn’t, you have also played a part and I am additionally thankful for that.

"Across 23 years there have been a lot of you who have been a part of the process. I know you all will understand that departing competitive cycling has been a long and difficult decision to make, but that it is the right decision for me and for that I say, “Thank you.”  I look forward to our next talk or bike ride together."