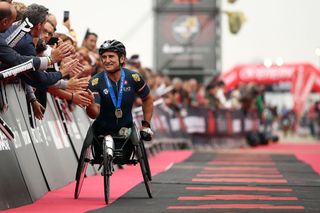 Italian para-cyclist Alex Zanardi has been moved out of intensive care amid "significant clinical improvements" to his condition two months after suffering severe injuries when he was hit by a truck during a handcycling race in Siena.

The four-time Paralympic gold winner and ex-Formula 1 driver suffered severe head injuries in the collision during the 'Obiettivo Tricolore' relay race, later undergoing four separate neurological and maxillofacial surgeries after being placed in an induced coma.

Initially treated at Siena University Hospital, Zanardi has been in Milan's San Raffaele Hospital since July. A statement issued by the hospital on Wednesday reported that his condition is improving.

"After a period during which he underwent intensive care following hospitalisation, the patient has responded with significant clinical improvements. For this reason, he is currently being assisted and treated in semi-intensive care at the Neuroanimation Unit, directed by Professor Luigi Beretta."

Zanardi last underwent surgery on July 27, a "delicate neurosurgery" to treat some complications resulting from head injuries suffered in the accident, which saw the 53-year-old suffer fractures to most of the bones in his face.

Before his accident, Zanardi was riding with a group of cyclists, including ex-pro Daniele Bennati, at the 'Obiettivo Tricolore' race on open roads in Tuscany. Zanardi lost control on a descent and collided with a truck coming the other way.

Local prosecutors opened an investigation into the incident, looking into the organisation of the race and the safety precautions taken at the time.

In recent weeks, Formula 1 teams have carried '#ForzaAlex' decals on their cars in support of Zanardi, who raced in the sport between 1991 and 1999. He also won two CART championships before a crash at the Lausitzring in Germany in 2001 resulted in the amputation of both legs.

Zanardi returned to competition at the World Touring Car Championship in 2005, and then took up handcycling, where he went on to enjoy great success. Since 2007, he racked up 12 Para-cycling World Championship titles and four Paralympic golds across the 2012 and 2016 Olympic Games in London and Rio de Janeiro.