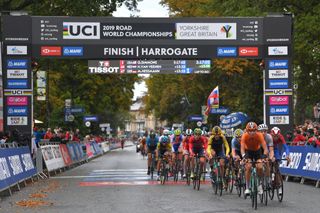 There is scope for the 2020 World Championships to be postponed to April of next year due to the coronavirus pandemic, but a representative of the organising committee has said that such a measure is "unlikely" to be taken.

According to La Dernière Heure, a postponed World Championships would be held the week after Liège-Bastogne-Liège, while the 2021 Worlds would proceed as planned in Flanders the following September. It would mean that 2020 world champions crowned in April would hold their rainbow jerseys for just five months.

However, the hypothesis was downplayed by Nicolas Voide of the Martigny-Aigle 2020 organising committee.

"This option hasn’t been totally ruled out, but it’s unlikely that we will make use of it," Voide told La Dernière Heure.

2020 World Championships to go ahead in Aigle-Martigny

The 2020 Worlds are due to take place from September 20-27 in Martigny and Aigle, Switzerland. Despite the revisions to cycling calendar caused by the COVID-19 pandemic, the event remains in its original dates, even though the elite men’s time trial will now clash with the final stage of the rescheduled Tour de France on September 20.

Marca reported in May that the UCI was examining the possibility of moving the Worlds to a later date in 2020 at an alternative venue in Oman, Qatar or the United Arab Emirates due to the limits on public gatherings in place in Switzerland.

Public gatherings – including sporting events – of more than 1,000 people are currently prohibited in Switzerland, but in late June, the organising committee announced that the World Championships remained on track to go ahead in Martigny and Aigle as planned.

The 2020 Swiss Championships will be held on the Worlds circuit on August 22 as a "proper rehearsal" for the main event.

The UCI has made no secret of its desire for the Worlds to be held on its original dates. When the governing body announced cost-cutting measures in early April, it stressed the importance of holding the revenue-generating events that are held under its auspices, namely World Championships and World Cups.

The UCI Mountain Bike World calendar has been decimated by cancellations, while the Waterloo and Dublin rounds of the Cyclo-cross World Cup have also been cancelled.