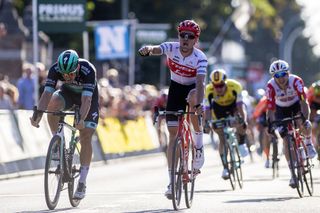 The 2020 Primus Classic, scheduled for late September, has been cancelled due to a combination of the Belgian race taking place on the final weekend of the rescheduled Tour de France – meaning that TV coverage of the one-day race couldn't be guaranteed to sponsors – and because of uncertainty surrounding the organisation of VIP activities due to the ongoing coronavirus crisis, race organiser and former pro Peter Van Petegem has told the Belgian media.

The Primus Classic Impanis-Van Petegem was one of very few races to retain its original 2020 UCI calendar date, which this year was set to be September 19 – the weekend before the men's World Championships road race, for which the race has become a favoured warm-up event.

Last season, the UCI 1.Pro-ranked event was won in a bunch sprint by Trek-Segafredo's Edward Theuns, ahead of Pascal Ackermann (Bora-Hansgrohe) and Jasper De Buyst (Lotto Soudal), and saw Theuns' Trek teammate Mads Pedersen in particularly active form before the Dane went on to win the men's road race at the Worlds in Yorkshire, in the UK, a week later.

Due to the COVID-19 pandemic, this season's rescheduled UCI calendar has seen the Tour de France moved from its traditional July spot to a late-summer slot of August 29-September 20 – which meant that the Primus Classic would have taken place on the Saturday of the Tour's final weekend, a day before the Grand Tour reached Paris.

"It meant that we would get little or no TV broadcast, so we could no longer guarantee our promised agreements with the sponsors," explained two-time Tour of Flanders and 2003 Paris-Roubaix winner Peter Van Petegem, according to Het Nieuwsblad on Tuesday.

"It would be our 10th edition, and it deserves a party with all the trimmings," Van Petegem said. "We look forward to 2021, when we'll organise the race the week before the World Championships that are taking place in Belgium."