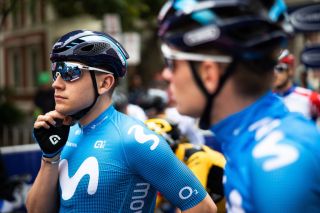 Gabriel Cullaigh had a baptism of fire at Saturday's Omloop Het Nieuwsblad, his first Classic as a professional rider. Despite not finishing, he lines up for Kuurne-Brussel-Kuurne on Sunday ready to throw himself into some of the toughest racing conditions once more.

The 23-year-old from West Yorkshire, in the north of England, has his sights set on becoming a top Classics rider, and we caught up with him at the Opening Weekend to find out more about him and how he got here.

Cyclingnews: First of all, how did you get into cycling?

Gabriel Cullaigh: It started when I was younger, with my brother and mates. We lived next to this little recreational field and as soon as we were able to ride bikes we just messed about in that field, making jumps and stuff. Once I got a bit older, during summer holidays we started to venture a bit further, on the mountain bikes, and I kind of just got the bug for it.

I started riding more with my mum and dad. My dad had a hybrid bike and I remember going out with him and he absolutely kicked my head in, After that, I was like ‘I have to get a road bike’, so I found one in the newspaper ads and bought it with the money from my newspaper round. It was like £100 for a Bianchi, a 56cm frame, which is 3cm bigger than what I’d ride now. From there, I couldn’t get off it.

Cullaigh to turn pro with Movistar

I joined a local club – luckily where I live in Holmfirth there’s a really good system – and was introduced to racing and training. That was it then – I got the bug, and was racing every weekend. It was more a social thing to begin with but the competitive side grew from there.

CN: You were on the British Cycling academy programme but were always more interested in the road than track?

GC: I was on the academy for two years and did a bit of track but just training. The first year we all trained towards the Cali World Cup and I didn’t make the cut, but that meant me Jake Kelly, Chris Lawless, and Scott Davies all went to Australia and focused on the road with Keith Lambert. After that I just had the bug.

The Academy is track oriented but there are always one or two who focus on the road. That year me, Lawless and Davies were focusing on the road and in the end we’re all WorldTour now. it’s not just coincidence.

There are plenty of Brits in the WorldTour now but the domestic scene is struggling badly. How do you square that?

It’s a real shame. There are so many young guys coming through the ranks now and if they can’t get a ride on the Continent they’re struggling to get a ride on a British team. It always seemed to be you’d have a 50-50 choice of either. I don’t know what the solution is but it needs sorting out. We have all those young guys and in years to come we could be a nation like France and Italy who just have countless pros. I haven’t got the answer but hopefully everyone can get together and get it back on its feet.

GC: Mads Pedersen won that day. It was a really hard race and we came to the finish with four of us. I thought I’d studied the finish right but as you come through Menin Gate into Ypres, there’s a slight kink – not a chicane, but the barriers come out. Mads went and I thought ‘right, I’m going’, and I got behind him and I thought ‘I’ve got him here’, and I went to go on the left and the barrier was there so I had to slam on the brakes. He did the right thing and completely shut the door, but I was still happy with third.

CN: You joined SEG for 2017 but left and rode with Team Wiggins for two seasons. What’s the story there?

GC: SEG approached me at the end of 2016 when I was looking for a change and to focus on the road. I started having breathing problems. It’s a long old story but I had EILO, which stands for exercise induced laryngeal obstruction. I was getting chest infections because of it and I wasn’t happy, so I decided to stop racing in June. SEG kind of left me to it and I decided I wanted to join Wiggins. It didn’t feel like a risk. For me, you’ve got to be where you’re happy, and I knew the management already. SEG had a few more European races but I was confident I could do what I needed to do with Wiggins. Plus I had Brad bugging me so I couldn’t really say no.

CN: How did you end up at Movistar?

GC: At the end of 2018 I thought I had quite a few options but they all fell through. Luckily, I had a good contact with Allan Peiper, who was trying to get me onto CCC, but in the end they said they were full. Then he went to UAE and I went on their training camp and they said ‘do another half a year at Wiggins, then stagiaire with us and maybe we’ll have a contract for you’. So that was the agreement but luckily I didn’t sign anything, because Movistar approached me and offered me two years. I was like ‘I’ll definitely take that’.

CN: How is it going there?

GC: I couldn’t be happier. I’m getting into all these races, it’s a great setup, a new language… brilliant. it’s obviously different to what I’m used to but it’s professional and relaxed at the same time. It’s a really nice environment.

CN: How is the Spanish?

GC: I’ve picked it up pretty quickly. I’m still not completely confident but I can understand everything so I’m getting there.

CN: What type of rider are you?

GC: I’m still trying to find my forte, and these next few weeks will be a test. I’ve not been totally happy with my sprinting so far but I feel like can give a bit more there. But these are races I dream of and want to win. Look at my body type, my weight, and my power, and it’s all suited to this type of racing… so a Classics rider.

CN: How is it being a team that’s not traditionally a Classics team?

GC: It’s not a classics team but I have a lot more opportunities here. If I went to a Classics team, I might only get one race, but here I get all of them. I can learn from Jurgen [Roelandts], who’s been pro since I started riding a bike. To learn off someone like that is fantastic, so I couldn’t be happier.