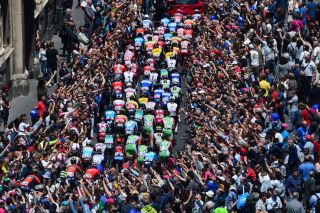 The Giro d'Italia is traditionally won in the high mountains of the north, amongst the snow-covered Dolomites and rugged Alps, with a final sprint or time trial into the centre of Milan crowning the winner of the maglia rosa. Yet, arguably the best way to understand what the Giro d'Italia means to Italy and the Italians is to experience it in the south of the country, somewhere below Rome, where life moves a little slower and where the Giro is still considered a day of local celebration more than a bike race.

In the south of Italy, people still stop work to see the race go by, schools close to cheer the riders from the roadside, and people proudly pick out a pink t-shirt or polo shirt to wear in a friendly sign of solidarity with the Corsa Rosa.

The chance to be part of one of the biggest sporting events of the country, to recall the history of Italy via the history of the Giro d'Italia, is a moment of pride. They aren’t tifosi and many would perhaps struggle to recognise even Vincenzo Nibali, but they want to see and perhaps even touch the maglia rosa, garner any rider's scribbled autograph, or these days perhaps a quick selfie and a free hat from the publicity caravan.

A borraccia (bidon) gifted by a rider at the finish is a special prize that perhaps inspires a future rider and most certainly a lot more affection the next time the races passes through.

Giro d'Italia: The best sprinters of the past 30 years - Gallery

Greg LeMond and the 1986 Giro d'Italia: 'It's all extremely complicated here'

In return, the Giro d'Italia shows off the little known beauty of the south of Italy to the rest of the world. A traditional first week of the Giro in the south climbs into the sparsely populated Calabria mountains, rides through the wheat fields and olive groves of Puglia and perhaps high into the Abruzzo mountains for the first shakeout of the overall classification.

The peloton might ride alongside long flat beaches between Pizzo Calabro and Praia a Mare or along the rocky coastline of the heel of Italy and the Parco Nazionale del Gargano to Vieste, where stage 9 was due to finish today.

The Giro d'Italia is a three-week showcase of Italy and a three-week celebration of national pride for the Italians, as much it is a bike race.

"We've realised that the growing success of the Giro d'Italia, especially internationally, depends on where the race passes, on the Italian landscape. Italy really is the world's most beautiful place and so hosts the world's hardest race," boasted the Editor of La Gazzetta dello Sport, Andrea Monti, in the introduction to the special edition of the Bell'Italia travel magazine that highlights the history and culture along the route of each edition of the Giro d'Italia.

Italian writer Dino Buzzati captured the beauty of the south of Italy in May when he wrote about the 1949 Giro d'Italia for the Corriere della Sera newspaper.

"There were a few attempts to go on the attack but the countryside was just too stunning. Even riders lacking any sense of beauty agreed in silence: suffering in such a beautiful place was a crime against humanity," Buzzati wrote about stage 3 from Villa San Giovanni to Cosenza in Calabria.

"It was like walking through a garden perched above a deep blue sea never before seen by mankind. Olive trees where tall like cathedrals, flowers, grass and wheat fields were all green under the spring sun."

This year's Corsa Rosa has been postponed until October due to the COVID-19 pandemic, which has hit Italy especially hard. If the race goes ahead between October 3-25, it will now be an autumn Giro d'Italia, with the shorter days, early sunsets and falling leaves characterizing the race instead of the passage from spring into summer, with pollen in the air and poppies growing among the roadside grass.

Some editions of the Giro d'Italia avoid the south of Italy due to logistical or economic reasons but there is always public outcry when it happens. How can the Giro d'Italia be a national Tour if it doesn't visit the south, the local media always decry.

Race organiser RCS Sport has chased the bigger start fees of northern Europe in recent years. Fortunately, the beautiful south will dominate the start of both the 2020 and 2021 races, even if some southern regions and cities are notorious for not paying the agreed fees for stage starts and finishes. RCS Sport has spent years trying to recoup the reported €2 million fee for the 2013 Grande Partenza in Naples. Not surprisingly, the race has rarely returned to the Campania region since.

Sicily has made a significant investment to secure the Grande Partenza and three stages for 2021, while the cancellation of the 2020 Grande Partenza in Hungary means the race will start in the south of Italy before heading to Sicily after three stages to follow the original route planned for May.

The revised October Giro d'Italia will be a far more Italian affair and include more stages in the south, with the full route and the new location of the Grande Partenza expected to be revealed in late June.

After the stages in Sicily, the route climbs north via the first mountain finish at Camigliatello Silano, deep in the rugged Calabrian countryside. That's followed by a sprint across to the heel of Italy for a flat finish in Brindisi and then a rolling ride up the heel of the peninsula to Vieste on stage 9. The first rest day on the Monday marks the end of the race in the 'Mezzogiorno' south, a symbolic border between south and the rest of the race in the centre and north of Italy.

From Taccone to Nibali: The heroes of the south

Southern Italy has never been one of the traditional hotbeds of Italian cycling. Most professional riders hail from Tuscany, Veneto, Emilia Romagna, Piemonte and Lombardia. Yet, cycling has always offered a way out of poverty and a chance to climb the social ladder, and some riders from Il Mezzogiorno have managed to cycle to a better life just like millions of others have done by emigrating around the world or moving north to study or find stable jobs.

Vito Taccone perhaps best symbolises a rider from the south of Italy, his stature and hunger as a professional between 1961 and 1970 in sharp contrast to those from the more industrialized north like Fausto Coppi or even Felice Gimondi.

Taccone hailed from Avezzano in the Abruzzo region, he was a pure climber, who won eight stages at the Giro and a haul of other Italian races thanks to his attacking style. He got into a fight at the 1964 Tour de France after being accused of causing a series of crashes and never returned. He was aggressive and passionate but full of affection.

"He quickly became the king of the south because there weren't other riders from down there - the tifosi only had eyes for him," recalled Gino Bartali in a book about Taccone's life written by Sergio Neri.

"People in the south loved him and he got fired up by their enthusiasm. He only needed a rival to give him a stare at the start and he took it as a challenge. He was a great rider but for people in the south he was their Campionissimo."

Vincenzo Nibali is currently the biggest name in the Italian peloton and leads what has been affectionately been described as leader of the current 'Squadra Terrona' – the team of southern rednecks. It includes his younger brother Antonio, career-long rival Giovanni Visconti, former teammate Damiano Caruso, and Domenico Pozzovivo. Just like so many from the Mezzogiorno, they had to move north to emerge as amateurs, with only Caruso returning to Ragusa in Sicily to bring up his family at home.

Nibali, Caruso, Visconti and others have emerged from the south to take on and even defeat their rivals from the north. But they never forget where they come from and are always the most sought after riders when the Giro d'Italia takes them home to the beautiful south.