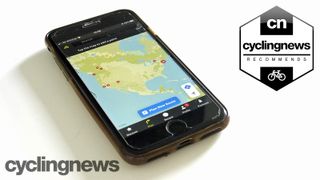 All it takes is the push of a button or a tap on a screen, and you can create a route, track your training, predict the weather, fashion a tourniquet, and connect with millions of other cyclists from around the world. Smartphone apps have made just about anything possible, and in the world of cycling, there are thousands to choose from. But how do you know which cycling apps are right for you? The process can be overwhelming – there are 50+ route-planning apps, for example, that all seem to do the same thing. Or do they?

Every cycling app has its own unique features and user model that has been tried and tested over the years. A number of apps have floated to the top, while others have sunk to the bottom of the ocean and disappeared altogether. Here is our pick of the best cycling apps that we use to plan, navigate, train, and more.

The best route planning app for all terrains

Komoot is a route-planning app that shines thanks to its exploratory features, such as highlighting points of interest in a given area – cafés, beaches, mountainous views, and historical sites just to name a few. Users can also optimise their route to fit a certain terrain, choosing between bike paths, road riding, mountain biking, gravel, and more.

In addition to the basic features of route planning, Komoot goes above and beyond by providing community-driven attractions and detailed surface breakdowns that few – if any – other platforms can offer. Premium users gain access to voice navigation, offline maps, on-tour weather, and multi-day planning.

Mapping and tracking of more than just bike rides

MapMyRide allows users to create, find, and track rides and routes for more than 600 different types of activities. The free app is nearly on-par with Strava, but with one key feature lacking: segment leaderboards. But, what MapMyRide Premium users gain is a number of features not offered on Strava: personalised training plans, audible feedback, and mid-ride performance updates. MapMyRide offers a crisp set of features across the board, with a free version that challenges the premium models of its competitors.

The most popular cycling app and the king of comparison

Segments made Strava one of the most popular cycling apps in the world, but it also hosts a number of features including route planning, heat maps, flybys, and one-touch recording. Earlier this year, Strava converted a few of these features – namely route planning and full segment leaderboards – to subscription-only, which costs £6.99 ($7.99)/month. Free users can still upload rides to Strava and follow any one of the 50 million users on the platform.

Heat maps – colour-coded maps that show you which roads are most popular among Strava activities from the past two years – are unique to Strava and contain a wealth of knowledge that no other platform can match. This feature, coupled with route planning, can help users map a safe and scenic route in a city they’ve never ridden in before.

See the storm coming before it’s too late

This app operates exactly as advertised – Rain Alarm alerts you when rain is approaching. The free version of the app will mark your location and display an easy-to-read radar that shows you precisely where it’s raining. If the weather is spotty and you’re still unsure, you can use the premium version to turn on alarms which will alert you when heavy rain is approaching – these alarms also sync with Android watches for added convenience. The simplicity of Rain Alarm puts it above its weather-focused competitors, with quick updates every 5-10 minutes to help you stay dry.

There is hardly a limit to what TrainingPeaks can do when it comes to tracking and analysing your fitness. Carefully calculated algorithms predict fitness, fatigue, and form using an equally complicated set of acronyms, including CTL, TSB, and everyone’s favourite: TSS. Competitors have struggled to match both the in-depth analysis that TrainingPeaks offers, as well as its massive following among coaches and athletes alike.

Users can view and upload workouts, see their overall fitness summary, and connect with training plans or coaches, all with the free version of the app. Premium users gain access to in-depth workout and peak performance analysis, unlimited workout libraries, the ability to build an entire prospective training plan, and much more. TrainingPeaks is the ideal platform for any serious endurance athlete looking to keep track of their training and fitness.

Free fitness tracking app for over 30 types of activities

What sets this app apart from its competitors is its functional diversity at the zero cost. The Wahoo Fitness app allows users to sync workouts from a variety of activities, including those with paired devices such as heart rate monitors, cadence sensors, power meters and smart turbo trainers. Users have access to their heart rate and power training zones, as well as adjustable audio alerts. It can then be connected with other accounts, enabling users to upload activities to a community feed such as in Strava.

Having a Wahoo Elemnt head unit and its companion Wahoo Elemnt app increases its versatility, by adding features such as route planning, workouts, and shareable live tracking.

Fascinating gearing comparison for the most mechanically inclined cyclists

After plugging in your current set-up of gears, tyres, and crank length to the Bike Gear Calculator app, you can adjust the virtual chainring and sprocket to compare and contrast different gearing set-ups for your bike. Users can toggle the cadence and speed bars as well, and see which gears match up. This could come in real handy for gravel, track, cyclo-cross, and mountain bike riders who might be limited with a 1X set-up and have fewer gears to choose from. Using the app, riders could optimise their set-up for a given terrain – a wider range of gears, for example, on a hilly cyclo-cross course; or a narrower set of gears for a flat and fast gravel race.

Know what to do when something goes wrong

Crashes happen, and it’s important to know what to do when a rider goes down. And if you don’t know what to do, it is pretty amazing that we can have an app in our pocket that will walk us through first aid procedures for almost any situation. This free app includes first aid guidance for bleeding, broken bones, head injuries, heatstroke, panic attacks, and more. There’s even advice for dealing with disasters such as wildfires, tornadoes, heat waves, and power outages. Downloading this app is a no-brainer: it’s free, and it could help save a life.

How to personalise your catalogue of cycling apps

1. What are your goals as a cyclist?

Are you riding or training? This simple question will help you determine if you should download a fitness tracking app like Wahoo or TrainingPeaks. Bike riders don’t necessarily need to track their fitness – they just want a safe and beautiful road to ride. Bike racers, on the other hand, want to know how hard their ride was, how their fitness is improving, and how to peak for their goal event. Fitness tracking apps take much of the guesswork out of training by providing structured workout and long-term plans to help us reach our fitness goals.

2. What types of roads do you have nearby?

If you live in the city, route planning is going to be more intentional than exploratory. Features like Strava’s heat map and user-uploaded routes on MapMyRide can help you find the most popular bike routes and cycle ways, which typically avoid traffic-laden roads. But if you live out in the country – with trails, paths, mountains, and single track to choose from – an exploratory app like Komoot could be the perfect tool to help fuel your adventure.

3. Are you more of a social cyclist, or a solo rider?

One of the key features of many of these apps is that they allow us to connect with thousands – and sometimes millions – of other cyclists around the world. How else could you directly compete against Tour de France winner Egan Bernal other than challenging his KOM on a Strava segment? We can even keep tabs on other riders’ training – from the WorldTour pros to your friend that lives down the street. Apps such as Strava and MapMyRide allow millions of cyclists to interact from the around the world, including sharing routes and comparing times on both segments and entire courses.

Solo riders can find everything they need in route planning apps such as Komoot and Strava, from designing epic adventures to optimising their morning commute.