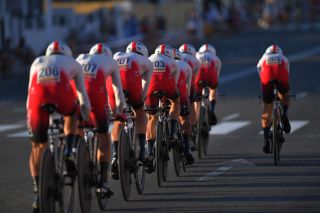 Part of the French peloton since 1997, Cofidis make a return to WorldTour level in 2020 following 10 years at Professional Continental level.

Following the signing of Elia Viviani from Deceuninck-QuickStep for the new season, they'll have a capable, proven winner and leader, while retaining Jesús Herrada and adding French climber continues the squad's decent representation in the mountains. If everything goes right for them back among the sport's very best teams, Cofidis could have a successful 2020.

With the possibility of a WorldTour berth on the table, Cofidis rode like a top-end team for much of the 2019 season, hoovering up 20 victories – many of which came at the expenses of much bigger and supposedly better teams and riders.

They included Jesús Herrada easily dispatching Romain Bardet (AG2R La Mondiale) at the summit of the Ventoux for the win at the Mont Ventoux Dénivelé Challenge, when you might have been forgiven for expecting the opposite outcome. He also went on to take a fantastic solo victory on stage 6 of the Vuelta a España.

Jesús Herrada: The Spanish climber was one of the top dogs at the French team in 2019, and although the arrival of Viviani and Martin for 2020 may overshadow his likely achievements this coming season, their presence is unlikely to diminish Herrada's abilities and impact.

Elia Viviani: One of the fastest sprinters in the world, Viviani's arrival – in the same year that the team returns to the WorldTour – may herald a sudden glut of victories, providing the Italian's new sprint train quickly gets up to speed.

Guillaume Martin: Having finished the Tour de France three times, the 26-year-old Frenchman has the experience to break into the top ten overall in 2020. With a mind as sharp as his legs, he is considered one of the most cerebral riders in the peloton.

Christophe Laporte: Whether sprinter Laporte will thrive in an environment that will see the departure of Nacer Bouhanni and the arrival of Viviani remains to be seen. Either way, he was the team's 'winningest' rider in 2019 with his nine victories, and will be looked to for more of the same – or better – in 2020.

Cofidis appear, appropriately enough, to have picked up one of the most famous lines from one of France's most-famous novels, and adopted a 'one for all, all for one' approach that has seen success for the likes of Jesús Herrada and Christophe Laporte this year: two riders from just seven who were between them responsible for all 20 of the team's 2019 wins.

Laporte has completely overshadowed the troubled Bouhanni on the sprinting front in recent seasons, and, with Bouhanni moving on to Arkéa-Samsic for 2020, there might well be a more harmonious vibe on the team going forward, although the arrival of Viviani means that Laporte will have few chances on being the team's top sprinter.

"I would have no problem working for Elia in the biggest races, like the Tour de France, in the pure bunch sprints," Laporte told Cyclingnews at this year's Arctic Tour of Norway once Viviani's signing had been confirmed.

"He's one of the fastest riders in the world, who's won races everywhere. I'll happily work for him in those races, but all year – I don't think so," he said, as Laporte will continue to target slightly smaller races for himself, with this year's successes for the 27-year-old including stage wins at the Tour de Luxembourg and the Etoile de Bessèges, while also taking the overall title in the latter.

"We are very proud of our recruitment of Elia Viviani, who has established himself over the years as one of the best sprinters in the world, and will be the team leader," said team manager Cédric Vasseur, who will be hoping that his new arrivals will quickly be able to integrate with the squad's more established names like Laporte and Herrada.

Although Cofidis were able to hold their own in 2019, with 20 wins chalked up this season, the official step up to WorldTour level will see them having to take on the top teams on an even-more-regular basis.

Of those 20 victories, only one – Jesús Herrada's stage win at the Vuelta a España – was actually at WorldTour level; all the rest came at a mixture of 2.HC, 2.1 and 1.1 UCI-ranked races, including the Tour de Luxembourg, the Etoile de Bessèges and the Tour Poitou-Charentes.

Despite having been classified as a Pro Continental team for the past decade, Cofidis have nevertheless enjoyed regular participation in the Tour de France thanks to both being a French team and the availability of wild-card selections to the organisers. But the Tour's the Tour, and while the team's sponsors will be looking for its first stage win there since 2008, will that much change in 2020?

Even with the addition of Viviani – who won his first Tour stage in 2019 with Deceuninck-QuickStep – they could remain little more than just another stage-chasing squad among 22 teams hoping that the chips fall their way. True – Viviani will have a dedicated sprint train built around him in order to try to deliver the goods, but these things can take time, and the 'new' Cofidis may not bear fruit for a while yet.

Cédric Vasseur's men will no doubt enjoy their return to the WorldTour, but may nevertheless initially struggle on their re-entry to the top tier, even with the likes of Elia Viviani, Guillaume Martin and Nathan Haas coming on board.

The team's combined relative lack of experience at the highest level may simply mean that it's business as usual for the long-running team, and although that's no bad thing – they'll likely win plenty of races again at non-WorldTour level – the really big wins may continue to elude them for a while yet.