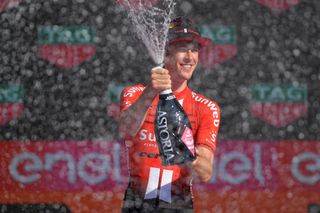 Given the fact that I am currently on a train to France and starting Tour de la Provence tomorrow, it's safe to say that off-season is done. Over. In the rear-view mirror. How was it? Let's put it this way: I saw 4 a.m. roll by on the clock almost nightly and had to do laundry frequently because my shirts all smelled of dinner that had been returned.

No, I didn't suddenly become a party animal, but rather a father.

My 2019 season ended with the World Championships—my legs were only good enough for a top-20 placing in the time trial, while the cold and rain-soaked road race delivered the hardest single day of racing of the season. I finished—an accomplishment in its own right—empty but fulfilled.

After a short night of achy sleep, I was off to the Netherlands for Team Sunweb's pre-2020 team meeting before heading home, safely 10 days ahead of my daughter's due date.  After meeting my new teammates, I turned in early to catch up on sleep.

A scant few hours later, I was awoken by a confusing sound. I was sure that I'd turned all of my alarms off, but when I checked my phone I saw three missed calls from my wife. At 2 a.m. I didn't need to call back to know what was happening, but I did anyway just so that I could say I've received the "you need to get home NOW" call.

The next step was to wake my coach up at 3 a.m. and tell him not only that I needed to skip out on the team meeting, but also that I needed him to drive me to the airport. As a recent father himself, he was thankfully eager to help me. The only thing that went quickly the next 22 hours was the tight connection in Frankfurt, and that was because I was running. With four hours left in the flight to Denver, the clock stopped moving altogether.

I figured there was no better occasion to splurge on $20 wifi, so my sisters-in-law were able to keep me up to date with my wife's progress while keeping her company. At last I was on the ground and I blessedly breezed from the plane to the car in thirty minutes, followed by a spirited drive to the hospital, where I walked into a room completely full of women who had been waiting 22 hours for my arrival.

Thirty minutes later, I could barely see my beautiful screaming daughter through the tears in my eyes. Still wearing my team polo and smelling like travel, the surreal moment cemented itself in my mind.

The four months and a bit that have passed since then have been a blur of the cliched exhaustion, frustration, elation, and joy that is parenthood. Somewhere in there I managed to get quite a lot of training done, including a couple of training camps.

Ever the fount of wisdom, my former teammate Roy Curvers used to tell me that he went to training camps and races to recover, and now I know the truth of that statement. As difficult as kissing my daughter goodbye was, I wasn't upset about having a week to train hard, put my feet up afterward, and sleep to my heart's content, knowing that the moment I returned home I would dive head-first back into dad-life. Thankfully, little Elena remembered me each time I returned, and my legs eagerly soaked up the training, even adding a few dad watts.

I'm looking forward to the 2020 season—this year marks my seventh in the Sunweb organization, the second-longest tenure of my teammates, and I'm one of two riders over 30 years old. We've got a lot of new faces in the team, and more than a few of them make me feel old. I'm doing my best to embrace the 'veteran' status, and will see what knowledge I can impart to my younger colleagues.

What our team lacks in years, though, we more than make up for with enthusiasm. The year has started well with the Australian squad delivering our first victories of the year, and now it's time for the European squads to keep the momentum. Let's see what these dad watts can do!