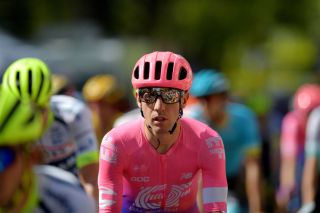 Michael Woods' impressive solo victory at Milan-Torino has boosted his confidence for Il Lombardia and rightly gave him a place in the list of eight big-name riders who are expected to fight for victory in the final Monument of the 2019 season.

However, the Canadian has named Primoz Roglic (Jumbo-Visma) as the rider to beat after he rode away from Woods and everyone else at the Giro dell'Emilia last Sunday.

Woods compared Roglic to 'Robocop' after seeing a video of the Giro dell'Emilia race. He is hoping that the long, harder 243km route for Il Lombardia will weaken Roglic and his dominant Jumbo-Visma team.

This race is so tricky to predict because it's so late in the season; everybody's form is all over the place. It's like the third week of a Grand Tour; it's more about motivation than real form.

"There's some great riders in action, there's Grand Tour winner and great Classics riders, too," he said. "If Roglic is on form on Saturday, he's the guy to beat. I feel after my result at Milano-Torino that I have to be considered one of the favourites for Lombardia. However, I've never had a big result so my first goal is to get on the podium."

Woods tips 'Robocop' Roglic as a favourite for Il Lombardia

Woods made seven attacks on the Superga climb overlooking Turin, eventually distancing all his rivals to surge to victory, with Alejandro Valverde (Movistar) and Adam Yates (Mitchelton-Scott) trailing and suffering in his wake.

Valverde and Yates stand out on the final start list for Il Lombardia, with Egan Bernal (Team Ineos), Primoz Roglic (Jumbo-Visma), Vincenzo Nibali (Bahrain-Merida), David Gaudu (Groupama-FDJ) and Dan Martin (UAE Team Emirates) all have the experience, form and team support to emerge on the testing Lombardia hills between Bergamo and Como.

Woods has shaken off the rookie badge within EF Education First and will have the support of Hugh Carthy, Simon Clarke, Sergio Higuita and Tanel Kangert for the 243km race under the falling leaves.

Woods has ridden Il Lombardia twice before and used time between the Italian races to recon this year's route, which sees the return of the late San Fermo della Battaglia climb after the Madonna del Ghisallo, the steep Colma di Sormano, the often decisive Civiglio.

"I reconned the route on Sunday after Emilia' I stayed at Simon Clarke's place in Varese and we rode over and check it out," he revealed.

"I think the return of the San Fermo della Battaglia will make people more hesitant on the Sormano. They will also be scare after the way Pinot attacked on it last year. All the climbing and descending will make for a great race. The weather should be good to, so it should be a classic Lombardia."