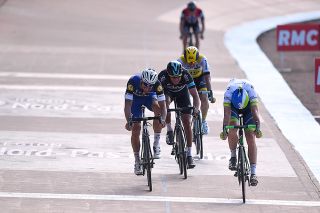 Cyclingnews readers have been voting this week to decide which edition of the last 30 years of Paris-Roubaix was the best.

The voting has trended toward recent memory, with the high-resolution videos of the last decade still etched in the minds of cycling fans.

It was a come from behind surge for Peter Sagan's 2018 Paris-Roubaix victory. The Slovakian star's spectacular escape had been eclipsed by Fabian Cancellara's 2010 solo attack in previous rounds but when push came to shove, the triple world champion's fans came out to put him into the final poll.

Mat Hayman's incredible sprint victory from 2016 where he denied Tom Boonen the outright record for most Paris-Roubaix wins understandably continued to dominate the voting.

Just as he did on the velodrome in Roubaix, the Australian crushed the competition, with Cancellara's first win from 2006 and Boonen's dominant 2008 performance hardly a challenge.

Which one will win the overall best edition of Paris-Roubaix title?

We think they're all winners but now it's up to you to decide.

Which edition of Paris-Roubaix was the best? Cyclingnews readers have chosen the two finalists that will go head-to-head in today's poll! It's Peter Sagan vs. Mat Hayman in the final round of voting 👇💪🚴‍♀️🚴‍♂️https://t.co/PxPOr7gFYj pic.twitter.com/3TNWZOH5Y2April 11, 2020

This is an important decision so we've dug up some videos from each edition of our final round so you can refresh your memory before voting.