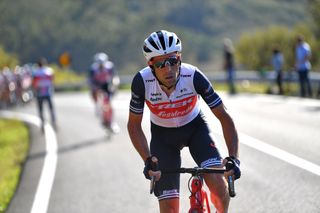 In a normal 2020 cycling season, Vincenzo Nibali would be racing in north Sicily today, taking on stage 6 of the Giro d'Italia, the day after the Etna summit finish. Instead, the Trek-Segafredo leader is stuck in COVID-19 lockdown, training indoors and giving interviews about what would have been.

In an interview with Tuttobiciweb, Nibali talked about missing racing, the lack of doping controls and, most interestingly of all, the chances of him competing at Paris-Roubaix – to be held this year on October 25 – before he hangs up the bike.

"It's the only one I'm missing among the Monuments," the Il Lombardia and Milan-San Remo winner said.

"It might fit, although it's not really my speciality and I've never raced it because it didn't come at the right time in my calendar. But yes, I'd like to try it."

This year, Nibali was set to target the Giro, Vuelta a España and the Olympic Games road race before COVID-19 struck. Last week, he talked of how much he missed the Giro, but didn't commit to any set schedule for when cycling returns.

The Giro and Vuelta overlap, as well as Liège-Bastogne-Liège falling during the Italian Grand Tour, certainly complicate Nibali's plans. For now, though, he's just keeping active ahead of the sport's planned return with Strade Bianche in August.

"It's not the time to train at full speed. We're keeping ourselves active for the return and hoping we can start again," he said.

"I miss the challenge. Every now and then we do some simulation – a race, a full climb," he added, having raced a virtual Milan-San Remo and signed up for the Challenge of Stars eSports virtual races on the Bkool platform.

"The other day I challenged Diego Ulissi on a hard climb, over 15 per cent. Neither of us wanted to stay behind – when we got to the top, we were blue."

The lockdown, as well as confining cyclists in Italy and Spain to their homes until very recently, has seen the number of doping tests fall substantially. Romain Bardet, Thibaut Pinot and Tom Dumoulin have all said that they haven't been tested for months.

Nibali, however, says that he trusts his fellow pros, and is trying to think the best of them.

"I'm honest. I trust my colleagues and I want to think they're all honest," he said. "We've all changed cycling for the better. I want to think we're all good. Then, as they say, the mother of imbeciles is always pregnant."

The testing, like the racing, will be back to normal one day. For now, though, Nibali – like many others – remains in lockdown. But he's keeping himself busy enough, waiting to get back to what he does best.

"I have dismantled and reassembled everything in the house and in the garage. Now I have nothing to take apart and put back together. I'm calm enough."