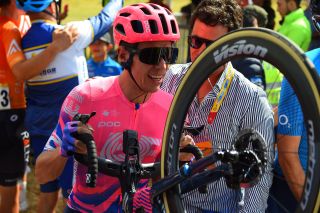 EF Pro Cycling's Rigoberto Uran says that he believes the remainder of this season's racing will be more open due to the revised calendar of races taking place at different time of the year than usual, and that the Tour de France will be "interesting", with the French Grand Tour set to take place in late August and into September.

"I'm hoping to do the Tour again this year, and then the World Championships, and then I don't know if I'll do the Classics or the Vuelta a España," Uran told Marca.com at the weekend.

The Colombian climber finished seventh overall at last year's Tour before suffering serious injury after crashing out of the Vuelta in September, which put an end to his season. Uran broke his collarbone and shoulder blade and several ribs, and suffered a punctured lung, which kept him in hospital for almost three weeks.

Urán back on the bike after three-month injury lay-off

He returned to racing on home soil at the Tour Colombia 2.1 in February, and has only those six days of racing in his legs so far this season.

"There are almost four months left to go until the Tour, which is the perfect amount of time to go there with great condition," he said.

The recent announcement by the UCI of a revised calendar for the remainder of the 2020 season gave, Uran said, "a little peace of mind that there is already light at the end of the tunnel".

"I think the racing will be a little more open because of the changed the calendar, and because we won't have so many racing miles in our legs," the 33-year-old said. "And I think it will be an interesting Tour, but we're going to have to wait and see what happens.

"We're hoping that these races can take place, but it's more important to save lives," he said. "While we do that, sport has to take a back seat."