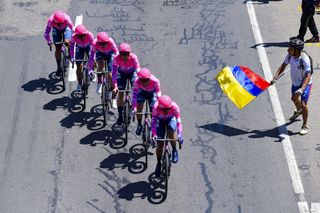 A funny thing happened on the way to the stage 1 team time trial at Tour Colombia 2.1. The race’s random drawing to determine the start order for the 27 teams saw all of the WorldTour squads land in the second half of the list.

The drawing was conducted Monday afternoon at the race headquarters, where one of the podium hostesses drew lots from a bin. Not a single WorldTour team came up early, and instead Israel Start-Up Nation was the first tier-one team drawn at 15th place. Movistar was 17th, Deceuninck-QuickStep 19th, UAE Team Emirates 20th, and EF Pro Cycling was 23rd. Team Ineos was the final WorldTour team at 24th, followed by the Russian National Team, Portuguese Continental team Efapal and Mexican Continental team Canel’s.

The probability for none of the six WorldTour teams being picked in the first 14 slots is one in 175.

Asked about the statistical anomaly of all the WorldTour teams landing in the second half of the start list, EF Pro Cycling’s Jonathan Vaughters indicated it indeed worked out well for the teams, the race and the TV broadcasters.

The drawing left other team managers scratching their heads as well.

Jonas Carney, performance manager for Rally Cycling, which started in the fifth position and led the stage until Deceuninck-QuickStep crossed the line 42 minutes later, said the lack of WorldTour teams in the first half of the drawing stood out.

“We noticed it when they were calling the numbers, but who knows,” Carney told Cyclingnews before his team headed out on course.

“It’s probably just a coincidence, but we don’t care. We’re happy to go early,” Carney said.  “The weather is good, and the guys had an excellent warm-up because the course was open. So we just did our warm-ups on the bikes and actually got the opportunity to work on our team time trial a bit in the warmup. That’s pretty rare, because usually the course is closed and you’re having to do everything on the trainer. We’re happy to go early and happy to be able to warm up on the course.”

For its part, the race referred Cyclingnews to UCI representative Pascale Schyns, who said via email that there were no irregularities in the drawing.

“The drawing was absolutely regular. No doubt about that,” Schyns told Cyclingnews. “All the numbers were put in the same hat and, for more transparency, the PCC asked one of the hostesses to make the drawing. If not, do you think two of the weakest teams would have been the last two to start, which was not very nice for the show and the public.

“But the race rules (made by the organisers) were very clear in the technical guide: drawing for all the teams; which is not compulsory for a team time trial organised the first day. The organisers could decide to have all the WorldTour teams at the end for example, but they did not do it.”

At the end of the day, it was Vaughters’ six-rider squad that seized the day, covering the 16.7km course in 18:01 to beat Deceuninck-QuickStep by 45 seconds and Team Ineos by 46 seconds. Rally eventually finished fourth.