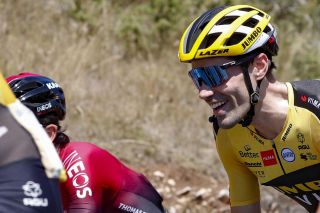 The stage honours fell to his Jumbo-Visma teammate Primoz Roglic and he avoided losing any time to his overall rivals, but Tom Dumoulin expressed disappointment at his performance on stage 4 of the Tour de France to Orcières-Merlette.

The Dutchman came home in 11th place on the stage in the 16-man group that reached the summit in same time as Roglic, including yellow jersey Julian Alaphilippe (Deceuncink-QuickStep) and defending champion Egan Bernal (Ineos).

“I just wasn't good. I was between hanging and strangling. I could only just keep up," Dumoulin told NOS afterwards. “I didn’t come to the Tour for that. I want to be better than this. It wasn't so great today.

Dumoulin missed last year’s Tour de France after undergoing knee surgery following a crash at the Giro d’Italia and the interruption of the 2020 season due to the coronavirus pandemic meant that he spent over a year – 420 days, to be precise – away from racing before he returned to competition at the Tour de l’Ain in August.

Despite the long lay-off, Dumoulin placed 11th overall at the Tour de l’Ain and 7th at the Critérium du Dauphiné, and he lined up for the Tour as one of Jumbo-Visma’s two protected riders, alongside Roglic.

Jumbo-Visma’s strength in depth was again notable on the final haul to Orcières-Merlette on Tuesday, with Wout van Aert and Sepp Kuss playing notable roles in whittling down the front peloton on the first category climb, before Roglic ripped away to win the sprint at the summit ahead of Tadej Pogacar (UAE Team Emirates) and Guillaume Martin (Cofidis).

Roglic had been forced to abandon the Dauphiné while leading the race due to the effects of his crash on the penultimate stage and Dumoulin admitted that he had been concerned about the Slovenian’s injuries during Jumbo-Visma’s final Tour build-up at Tignes last week.

“Before the Tour, in Tignes, I was still thinking: I hope he will get through it,” Dumoulin said. “But he's already showing his class here. He was really good and he said to Sepp and Wout to go all the way. With Wout, we had already seen how good he is at the Dauphiné, and it’s nice that Roglic finished it off.”

Van Aert explained afterwards that he had not expected to play such a pivotal role on the first summit finish of the race but he wound up filling in for George Bennett.

“It was not agreed that I would go along that long,” Van Aert said, according to Het Nieuwsblad. “The intention was that Bennett and Kuss would assist the leaders on the uphill, but I was in the front at the start of the climb, while the rest weren’t really visible. Those two always have a bit more trouble with positioning, and it wouldn't have been good to leave Primoz and Tom alone. Kuss did come, but I didn't see him at first. Then I made the decision to stay with Tom and Primoz.”

In the overall standings, Dumoulin lies 7th overall, 17 seconds behind the yellow jersey Alaphilippe and 10 down on his teammate Roglic. The next major test of the GC contenders’ credentials looks set to come on stage 6 to Mont Aigoual.