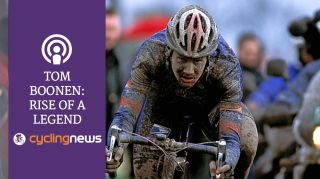 This podcast was originally recorded and aired in 2016. With no Paris-Roubaix this Sunday and no week-long build-up to the so-called 'Hell of the North' week, we've dug it out of our archives for you to enjoy. Click here to subscribe.

Tom who? That was the question on many peoples' lips at the end of the 100th edition of Paris-Roubaix in 2002. The race was fittingly won by the Lion of Flanders, Johan Museeuw. But behind him that day in third place was a young rider by the name of Tom Boonen.

Boonen says decision to retire will be his alone

Boonen: The time to say goodbye is not at the Classics

Boonen, just 21 at the time, had been earmarked for greatness since his junior days but during one of the most epic editions of Paris-Roubaix the boy became a man. In the 14 years since, the Belgian has gone on to establish himself as one of the most distinguished Classics riders of all time.

His success over the last few years is well known - he's a four-time winner of Paris-Roubaix but Cyclingnews have gone back to where it all started, that day in France when Boonen, the young lion, first roared.

During the podcast we will re-tell the story from Paris-Roubaix 2002. We will go back in time and re-live the race through the memories of Boonen's US Postal teammates, with interviews with George Hincapie, Antonio Cruz, Steffen Kjaergaard, Matthew White and of course Boonen himself.