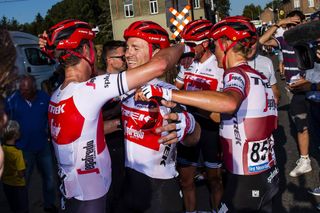 Edward Theuns played the finale of the Primus Classic patiently and perfectly with an attack in the closing 3km to take his first win in two years.

The 28-year-old Belgian finished ninth two days previously in Kampioenschap van Vlaanderen and so wasn't sure how his legs would react during Saturday's 197km race from Brakel to Haacht, but when his team delivered him to the finale with a shot for the win, the Trek-Segafredo rider delivered.

Theuns: In a year when it's hard, you learn the most

The victory was significant for Theuns, who had shown steady progress in his second year on the WorldTour with Trek-Segafredo in 2017 but then suffered injury and disappointment last season with Team Sunweb. He and Team Sunweb ended his contract a year early,  and he came back to Trek, where he repaid the team's confidence with Saturday's win.

"This is such a huge relief, and a big thank you to the team," Theuns said. "It’s been almost two years since I’ve won, and I am super happy."

After a day of aggressive racing from his team, Theuns jumped away from the bunch with 3km to go and then just barely held on to win with the same time as runner-up Pascal Ackerman (Bora-Hansgrohe) and the rest of the 27-rider reduced peloton that almost chased him down.

"I am so happy, so proud that I could finish the work of the guys," Theuns said. "And for me, it’s also a big thank you to Trek-Segafredo to take me back after a tough year last year. Now I feel I am getting back to my best level, and I am so happy I could give a victory to the team."

Trek-Segafredo launched multiple attacks near the end of the race as the peloton got close to the day's breakaway. Jasper Stuyven went with 7km to go as the peloton closed in on the the final two breakaway survivors, setting up Theuns to jump up to him 4km later. Stuyven pressed the pace and dropped off soon after, leaving Theuns to power on alone.

"In the final, I was doubting a bit because my legs didn’t feel super fresh anymore, so I was talking with Jasper that I was not super confident to go to a sprint," Theuns said. "Jasper tried with an attack, and Mads [Petersen] and me tried to slow down the bunch by being in second and third position, trying to break the rhythm of the peloton.

"Suddenly I heard Mads screaming in the radio, 'Go Eddie,' and I looked back and we had a small gap, and so I jumped to Jasper. I wanted to continue with him, but he said immediately that he was done.  He did one last pull, and I went full with like 2.5km to go."

Theuns said he was motivated by info over his radio that there was some hesitation in the bunch.

"I was looking back and saw that I had a good gap, but the last 800 meters were really hard with a headwind, and I was feeling that they were coming," he said. "I know that a sprinting bunch has a lot of speed, so I didn’t want to put my hands in the air before I reached the finish line."

Indeed, Ackerman and the reduced peloton were closing fast, looking like they would absorb the lone rider before the finish, but Theuns held on and was able to get one hand off the bars to celebrate.

"In the last straight, I looked behind me, and they came so close," he said. "I don’t think I have ever come with so many cramps over the finish line. This is really a relief, and a thank you to the team because even after a difficult year last year, they kept believing in me."