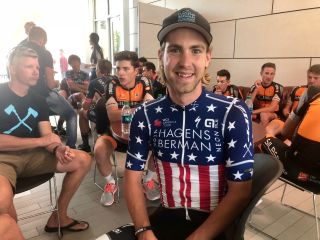 US squad Team Skyline continues to build its program heading into year two on the Continental level, adding half a dozen new riders for 2020 including 2018 US pro road race champion Jonny Brown from Hagens Berman Axeon and veteran Australian Johnny Clarke from Floyd's Pro Cycling.

Other new additions for the 2020 team include Clayton Travis, Curtis White, Wolfgang Brandl, Noah Simms and Johann van Zyl, who rode on the WorldTour for Dimension Data from 2016 through 2018.

Clarke will bring veteran leadership and quality palmares to the team, having raced professionally since 2005 for Colavita, Toyota United, Jelly Belly and UnitedHealthcare before joining Floyd's last year. The 35-year-old once again proved his mettle in 2019 with an overall win at the Tour de Taiwan.

Brown, 22, won the 2018 US pro title with a daring late solo move from a breakaway, but his feat failed to land him the desired WorldTour contract when he graduated out of Axel Merckx's U23 development program at the end of 2019.

"I've had a great four years with Axel Merckx's under-23 team, and it's my time to move to a new team as my time as an under-23 is over," Brown said in a statement released by Team Skyline.

"In 2019 I didn't have my best season and made a lot of mistakes as a rider," Brown continued. "I've made big changes and I'm fortunate for Team Skyline giving me the resources to keep growing. The team and I have big ambitions for 2020, and we are ready to  take the start line."

Van Zyl, 28, moved from Dimension Data to US Continental team 303 Project in 2019 but only raced 13 UCI days and is a bit of an unknown on the North American domestic circuit at this point.

Clarke's spot on the team comes after his two previous teams, Floyd's in 2019 and UnitedHealthcare in 2018, each folded. He said he was grateful to find a place to land once more.

"I’m getting pretty long in the tooth, but I just can’t stop yet; my cycling addiction is still alive and well," Clarke said in the team statement. "The team has added some stout new names to an already solid roster, and I can’t wait. Also the fact the team benefits type 1 diabetes is the cherry on top, to be out there doing what we love and spreading the word about such a serious disease.”

After spending 2019 working through the process of taking a long-standing elite team into the Continental ranks, Team Skyline is looking to start 2020 in Asia before focusing on racing in North America and a return to Europe to race in Italy.

The team's mission reaches beyond racing bikes, however. Based in Reading, Pennsylvania, Team Skyline is part of 'Winning The Race With Diabetes', a non-profit organization that actively educates communities about type 1 diabetes and type 2 diabetes prevention. The program organizes awareness rides around the country as well as speaking engagements at hospitals to talk about being active with the disease.

DeWald, the team's founder and also founder of Winning The Race With Diabetes, started the team in 2013 as an amateur elite program named after his Reading bike shop. When he was diagnosed with type 1 diabetes in 2014, the program took on a role larger than simply helping drive under-privileged kids into an active sport.

"I’m not ready to give up on inspiring people affected by type 1 and getting underprivileged youth a chance at living the Dream," DeWald said. "With the sport at an all-time low domestically, I know we’re at a turning point and we want Team Skyline to help turn around cycling in America.”