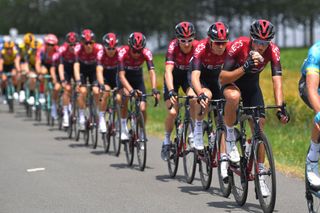 Team Ineos will keep to the same design as their 2019 kit for the coming season, the Tour de France-winning squad announced on Monday.

While other teams such as Trek-Segafredo and Total Direct Energie have already announced their new designs for the 2020 season, Team Ineos will only change the UCI WorldTour logo on the jersey.

The team adopted the new red-and-black kits ahead of the Tour de Yorkshire this year after Ineos took over from Sky as the team's title sponsor.

Look for Tour de France winner Egan Bernal and former winners Geraint Thomas and Chris Froome to take on the season in the familiar design by Castelli.

Sky to end sponsorship after 2019

New Season. Same Colours.As a thank you to our fans, we’ll be wearing the same kit for the 2020 season, with only the UCI WorldTour logo changing. Thank you for your support in 2019! pic.twitter.com/CkJ6ZW4iGmDecember 2, 2019