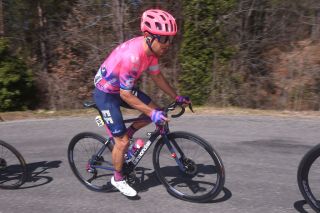 Tanel Kangert will join Mitchelton-Scott in 2021 after signing a two-year contract with the Australian squad. The Estonian has spent the past two seasons at EF Pro Cycling and previously had a successful eight-year tenure at Astana, where he was one of Vincenzo Nibali’s most trusted domestiques.

“I was contacted quite a few years ago by the team and somehow it slipped away, but the project to me has always seemed interesting,” Kangert said of his move to Mitchelton-Scott.

“It’s one of the teams that has the most fun on the road; professional, but fun at the same time which makes it easier to be very focused and have big goals.”

Kangert turned professional with AG2R La Mondiale in 2008 after racing as an amateur in France. He spent a year out of the professional ranks in 2010 before returning to the WorldTour in 2011 in the colours of Astana, where he would spend eight seasons.

Kangert taps out the tempo for Nibali

Winner of a stage of the Tour de Suisse in 2012 and the overall classification at the Abu Dhabi Tour in 2016, Kangert also finished in the top 20 at all three Grand Tours during his time at Astana, though he made his name primarily as a deluxe domestique.

Kangert helped Vincenzo Nibali to victory at the Tour de France in 2014 as well as the Giro d’Italia in both 2013 and 2016, when he played a key role in the Astana offensive on the penultimate stage to Sant'Anna di Vinadio that put the Sicilian into pink at the expense of his future teammate Esteban-Chaves.

The 33-year-old will now look to perform a similar supporting role on behalf of Simon Yates, who signed a contract extension with Mitchelton-Scott earlier this week.

“I really see myself in the same role as I have been for in many years, so I see myself as a support rider in the Grand Tours and why not in the week-long races, going for a result myself,” Kangert said.

“I really enjoy Grand Tours. I am not the best climber or time trial specialist but I can do all of those things and I would really like to win a Grand Tour as a team member once again.

“To be a good domestique you have to be a team player, you have to see the big picture. For me, I’ve never been interested in finishing a stage sixth, fifth, or fourth if I know my team leader can win. It’s not a sacrifice for me. I know that if we have a leader it’s because he is stronger and I am always willing to ride for that.”

Mitchelton-Scott sports director Matt White hailed the arrival of a rider he described as “no-frills guy who just gets on with the job,” adding that the Estonian was “very reliable under pressure.”

“He has been there and done it,” White continued. “He has been on teams that have won the Tour de France and the Giro d’Italia. He was there for Vincenzo Nibali, actually, when they rolled us on the last stage of the Giro in 2016. He was up the road, waited for Nibali and drove it for a couple of kilometres to help Nibali gain valuable seconds on Esteban.”