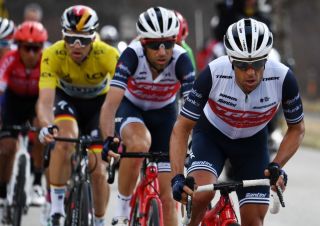 In a contract year and with a second baby on the way, Richie Porte has much to mull over personally and professionally as he navigates a suspended season and the global coronavirus pandemic.

Porte (Trek-Segafredo) has "touch wood" so far evaded pay-cuts that several rival teams have been forced to implement, as stakeholders work to salvage some WorldTour racing this year.

"It's not nice to see and read other teams having to do that, and put staff off. It's going to affect everyone. In normal life, you know, people are losing jobs and their livelihoods, so you're pretty sheltered if you think it's not going to affect us somewhere," Porte told Cyclingnews in a phone interview.

The Australian is on lockdown in Monaco and, although he has seen some riders clocking miles outside, has opted to stay indoors, doing hour-long sessions on the home trainer and trying to establish some form of routine with his pregnant wife, Gemma, and their son.

"I just don't fancy it, and Monaco is so small anyway. You'll probably get a six-kilometre loop in. I'd rather just sit on the trainer, to be honest," he said.

"The silver lining is you get to spend more time with the family, and having a two-year-old at home – well, he's almost two – keeps you busy and wears you out.

"By the time you're allowed to get out of the house for an hour a day, or whatever, to go do the groceries and stuff like that, it’s, like, I never really thought of the supermarket as being an escape."

Porte's attention was drawn to the coronavirus at the Tour Down Under, which he won, when Trek-Segafredo boss Luca Guercilena said he underwent a temperature check at Singapore airport en route to Australia for the January WorldTour opener.

The UAE Tour was placed into lockdown a month later after confirmed cases at the race, which was cancelled with two stages remaining. Around the same time, Porte was competing in France at the Tour des Alpes-Maritimes et du Var, and finished third overall, before readying himself for Paris-Nice.

Paris-Nice, for Porte, was a stepping-stone to the Volta a Catalunya, and "strange". By then, in March, COVID-19 had become a global concern – not just something you read about in the world pages of a newspaper – and there was mounting outside pressure to call off the race.

"Paris-Nice was a normal race when the racing was on. When you had the opportunity to have a bit of a talk to some of the other guys, there was a lot of discussion about the coronavirus and whether or not we should be there. But more so, the discussion was at night, when we were at dinner, and there were a lot of messages going between riders at the race, and other teams and our own team, about what was going to happen," Porte said.

"A lot of guys didn't think the race would make Nice. We made it there, but obviously the last stage was cancelled. It was a strange situation.

"[Bora-Hansgrohe's Max] Schachmann still deserved to win that race, and I think that was he was the strongest guy there, so it was still a good race."

Porte's three-month campaign before the cycling season was suspended may seem irrelevant in the context of a global pandemic, but equally could influence his future.

The 35-year-old wants to keep riding for a while yet – albeit perhaps in a different capacity at Grand Tours – and with no races on the immediate horizon, and only rumours of an August Tour de France, his fleeting foray stands to bolster contract negotiations.

"Lucky for me, I guess, I've won a race this year and, you know, I'd like to do a couple more years; riding for someone in the Grand Tours is probably more my objective next year, and then going for some week-long stage races," Porte said.

"I had a good routine going into the season when I was back in Tassie [Tasmania] – good training – and I know I've still got the motivation to be there, but this whole coronavirus thing is a spanner in the works, like it is for everybody else, I guess."

When asked if he was preparing for some form of racing this year, or was instead thinking ahead to the 2021 season, Porte said that he didn't want to do the "mental miles" of considering either.

"At the moment, I think I've just got to get on the trainer as much as I can, and try and keep whatever condition I have.

"To be able to go outside and train is going to be absolute bliss; something that I will probably never take for granted again is just that ability to go for a ride outside."