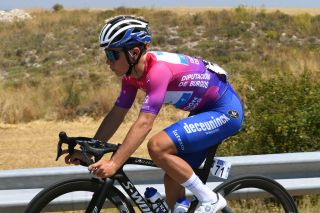 Remco Evenepoel (Deceuninck-Quick Step) struck a confident note Friday when the Belgian was asked if he thought he had the Vuelta a Burgos sewn up with just one of three summit finishes left to go.

Six riders remain at a minute or less on the Belgian racer on GC, with George Bennett (Jumbo-Visma) the closest at 18 seconds.

But although the margins are narrow, after Thursday's blistering mountain performance and solo victory it would seem improbable - although not impossible - that Evenepoel can be dislodged.

"I've still got 150 kilometres to go, so it's still a dream," the Belgian said after his team-mate Sam Bennett won a fraught stage into Roa de Duero on Friday.

"But it was a dream that I could get just one stage win and I didn't lose any time on Thursday, so that was a perfect day for us. I got a lot of congratulations through messages, maybe even more than when I won in San Sebastian [in 2019]."

In Evenepoel's favour, it would seem like he's got the heavy lifting of the Burgos stage race done. He was in the thick of the action on Tuesday's short, intense summit finish in Burgos Castle and then, on Thursday, he was head and shoulders above the opposition. Saturday's stage is only eight kilometres longer than Thursday's stage, and in terms of overall climbing, the trek into the mountains of eastern Burgos is not as challenging as stage 3.

Last but not least, its summit finish is not so demanding either. While the Picón Blanco had some dauntingly tough slopes, the final climb to Lagunas de Neila is shorter - four kilometres compared to eight - and steadier, even if Lagunas de Neila also contains some fearsomely steep 'ramps' in the last part of the ascent.

On paper, then, stage 5 will be harder both to open up gaps on Evenepoel and the Belgian allrounder's performance on Thursday is fresh in the memory to provide a serious deterrent.

However, in this most unpredictable of cycling seasons, nobody is taking anything for granted and a long-distance attack by teams like Movistar that have nothing to lose could yet upset the apple cart again. There is also the risk of echelons, should the wind suddenly strengthen in the way it already did on Tuesday and Thursday.

"There will be a big fight on the last climb for sure," Evenepoel predicted, "but as the stage isn't so difficult, I think there will be less stress before the climb itself."

"I think we have a really good team to control things, we have two guys on the climbs who can set a high pace and protect me."

Evenepoel argued that rather than making it a hat-trick of stages for Deceuninck-Quick Step on Saturday, "the most important thing is the GC."

"Of course if it's possible, then why not go for the stage? But the first objective is keeping the jersey: with two stage wins here, it's already been a fantastic week for us."