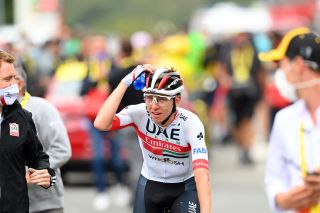 Moments after Tadej Pogačar (UAE Team Emirates) crossed the finish line with the victory during stage 9 at the Tour de France, Primož Roglič (Jumbo-Visma) was one of the first to congratulate him. It was the younger Slovenian's first Tour stage win, and the elder - despite being second - took the yellow jersey.

For all their amicability, Pogačar insisted in Monday's rest-day press conference that when it comes to racing, their relationship is a very different story. If the Tour de France comes to a point where he is taking on Roglič directly for the general classification or stages, then so be it.

"It's a race, of course, we respect each other, but no one's going to wait for anybody else," Pogačar, now seventh overall, told reporters. "This is a competition, everybody wants to win."

Pogačar is currently refusing to put an upper limit on his ambitions, whether that goes against Roglič or not. But what is perhaps really surprising about Pogačar at this point in the Tour is his ability to handle any beginners' nerves in the race.

"Stress is a big factor, but it is in everyday life, too," he stated matter-of-factly when asked about his coolness under heavy Tour de France pressure. "I manage that quite well, thanks to my parents."

During the Tour, Pogačar has team captain Marco Marcato assigned to him to keep him out of trouble, he revealed. "When there's chaos in the bunch I try to follow him, also Alexander [Kristoff] is great to be with when things get tough."

Tomorrow's stage 10 of the Tour, a very exposed run along the coast of western France, could see echelons, which proved tough for Pogačar to handle on Friday. He is confident but expects, "it will be a hard stage and may be complicated, but it could be a different kind of wind to the one we had last week, so maybe that'll be better for me."

Pogačar's one previous Grand Tour, the Vuelta a España last year, was where he made his first breakthrough by finishing third overall.

Although Roglič finished first overall, and the two were visibly delighted at each other's success, the Vuelta is only of limited use to him as a point of reference because he says that the Tour is "the biggest ever."

"It's harder, you feel the stress and chaos a lot more, not just in the finales but in the last kilometres as well.

"I am surprised how well I'm doing here, I knew I was on a really good level, but I was not expecting a win."

Win he did on Sunday, and it remains to be seen what Pogačar will be able to achieve in the days to come.

To judge by the Vuelta, though, performing well in the third week should not be a problem - back in Spain last September, he outpowered the entire field en route to the final summit finish, breaking away 30 kilometres from the finish to solo home alone. Rogič, for one, will not have forgotten that.