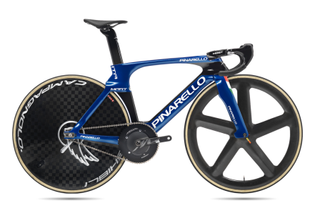 Pinarello has launched a new edition of its MAAT track bike, which the Italian brand describes as its "gift for the Italian team" ahead of the Olympic Games in Toyko in 2020.

The new model was designed in collaboration with the Italian federation and is said to specialise in the Madison and Omnium events while also being able to be ridden by the sprinters.

It will be debuted this weekend at the Track World Cup meet in Hong Kong before being ridden in Toyko by the likes of reigning Omnium Olympic champion Elia Viviani and pursuit world champion and world record holder Filippo Ganna.

The build draws on features from others in the Pinarello range, notably the Dogma road bikes and the Bolide HR track bike used by Bradley Wiggins to set the Hour Record in 2015.

The former has inspired the asymmetric frame design that is said to "optimise frame stiffness and power transfer". Meanwhile, the UCI's decision to scrap the 3:1 length-to-width ratio three years ago has allowed a more aerodynamic profile, where "the fork and seatstays have been taken to extremes".

The headtube has increased in size and now hides the fork head, which, according to Pinarello, "preserves the aero performance and functionality of the bike allowing the fork to freely rotate much more than the normal solutions used on TT bikes."

The 38mm handlebars are not completely integrated into the frame but feature 'pseudo' brake hoods to create a "new" position out of the drops, while narrower sections either side of the stem are said to improve control during hand-slings.

The launch of Italy's bike follows that of Great Britain, who unveiled their striking new Hope and Lotus bike a month ago.