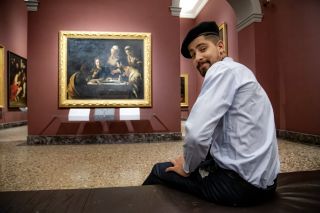 Peter Sagan (Bora-Hansgrohe) resumes his 2020 season at Strade Bianche on Saturday but he downplayed his prospects of claiming victory in what is the first race of a heavy schedule.

The three-time world champion is set to ride both the Tour de France and Giro d’Italia in the compressed finale to the year.

“It will be a short but very intense season, I think, with my programme,” Sagan said in a video interview to mark the presentation of the revised 2020 Giro d’Italia route.

“I will have to be ready for the Tour and the Giro, so I want to start my season and grow gradually.

"Strade Bianche is a very demanding race with quite tough climbs, even if they’re not that long. There’s a lot of elevation gain and it’s stressful on the gravel roads. It’s always a very difficult race. If I can be a protagonist, that’s already good.”

After Strade Bianche, Sagan will stay in Italy to ride Milano-Torino (August 5) and then line up for another tilt at Milan-San Remo. It is arguably the Classic best suited to the Slovak’s characteristics, even if he has endured frustration on the Via Roma (and the Lungomare Italo Calvino) over the years. He has placed in the top 10 on seven occasions, finishing second in 2013 and 2017.

“It’s a very beautiful and special race,” Sagan said, when asked if he loved or hated La Classicissima.

“I like Milan-San Remo, always, even though I haven’t won it. I’ve created a spectacle for the people and that’s the most important thing for me – to be a protagonist on the front.”

Milan-San Remo will be the only Monument on Sagan’s schedule in 2020, as he has honoured a previous commitment to ride the Giro d’Italia, even though the rescheduled corsa rosa clashes with the Liège-Bastogne-Liège, the Tour of Flanders and Paris-Roubaix.

Sagan said that he had no regrets about his decision.

“No, because it’s like making decisions in life,” Sagan said.

“You know, I was ready to ride the Giro since the start of the year, although [on the original calendar] I was going to ride some Classics as well. But you can’t have everything in life, and this is a special year. I’m just hoping that all the races that are planned will take place. If I do one race more or less, it doesn’t change a lot for me.”

The 2020 Tour de France concludes on September 20, with the Grande Partenza of the Giro taking place a fortnight later on October 3. The short turnaround means that Sagan will ride two Grand Tours in the space of eight weeks.

“We’ll see [what it’s like] when I do it, because I don’t think anyone has ever done it, with such a short recovery time between the two races,” Sagan said.

Sagan is set to miss the European Championships in Plouay on August 26 and the World Championships in Martigny on September 27. Juraj Sagan told Slovak publication SME that it will be "different" to line up for a national team that isn't led by his brother.

Peter Sagan last raced at Paris-Nice in March before the campaign was interrupted by the COVID-19 pandemic. He has trained at altitude in recent weeks, and his final race before the Tour de France will be the Critérium du Dauphiné (August 12-16), which he is riding for the first time in his career.